Archive for the 'Web apps' Category

A while back, I posted about a free web app from Metzger and Willard that shows National Geodetic Survey control points (benchmarks) near a specific area, and lets you view data for those landmarks. I’ve just noticed that they’ve created a newer web app called the Earth Survey Plugin, running in a Google Earth browser plugin that not only has the same capability, but also adds a bunch of additional features: 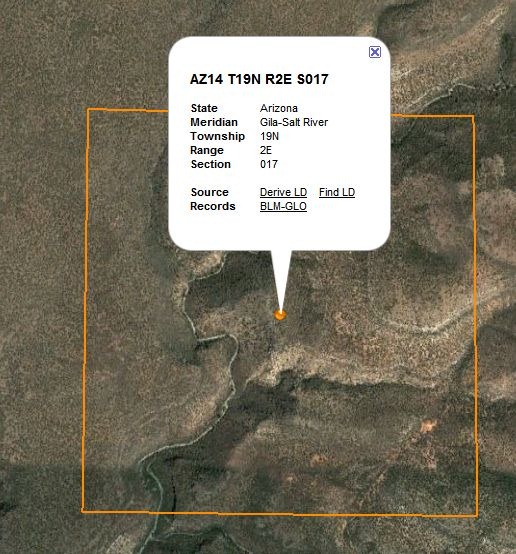 … or lets you enter the PLSS parameters, and find the center point associate with them: 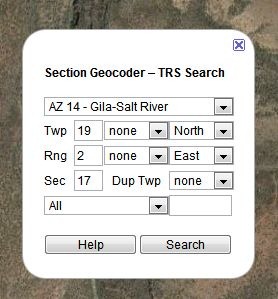 These can also be saved as a KML file. 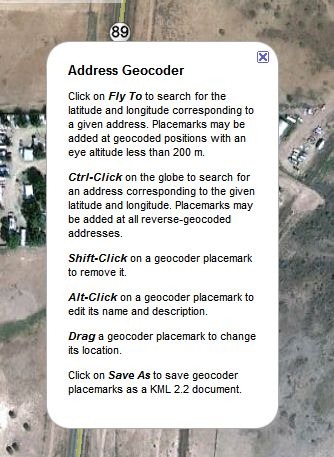 Plus, a set of overlays: 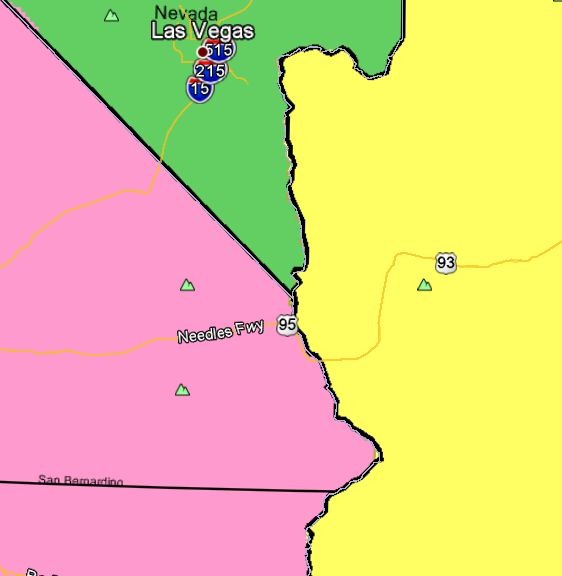 I first heard about the crowdmapping platform Ushahidi a few years ago; it’s an open-source app/platform that can collect/collate geotagged data in real-time from mobile observers, or delayed reports over the web. The data can then be mapped, viewed on a timeline, and analyzed. One significant obstacle to using the platform was the need to install it on a webserver with PHP/MySQL support – easy for some, but a challenge for others. I’m a bit late (about a year), but I just found out that Ushahidi has created a free service called Crowdmap that hosts the platform for you, lowering the technical barrier significantly. Examples of Crowdmaps include one for the English papal visit, and a Crowdmap for the Australian floods earlier this year (screenshots below). 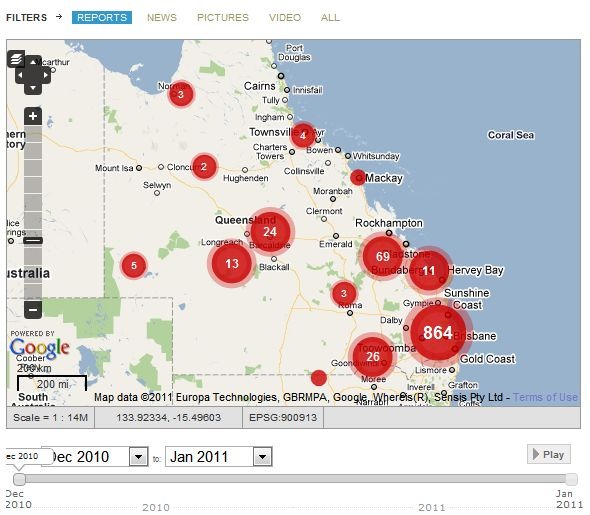 Convert A Shapefile Into A Google Fusion Table

Google Fusion Tables is a free service from Google that lets you visualize, map, analyze and combine data. Standard data formats for import are spreadsheet data (including direct export from Google Docs), CSV and KML files. But you can use the Shape to Fusion website to convert shapefile data directly into Fusion Table format, including not just points but also lines and areas. Note: You will need to have a Google account, and will also need to give the Shape to Fusion website permission to access your Google account to upload the data.

The first thing you’ll need to do is prepare a zipped file for upload that contains the .shp, .shx and .dbf files associated with the shapefile; you’ll also need to include a .prj file that specifies the coordinate system used by the shapefile. You’re limited to 200 MB in total uploaded data, and a maximum of 200,000 rows of data. For line and area shapefiles, you have the option of simplifying the geometry to reduce the total row count; you can also create a centroid point for areas.

Depending on the size of the file, it can take a while to process; this sample file of mines in Arizona with 10,512 rows took about 10 minutes. A regularly-refreshed text page will show you the status: 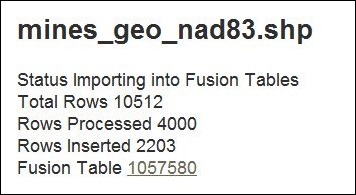 Once completed, you can directly access the Fusion Table data through the link at the bottom, or go to your Fusion Table data list and select the dataset; you can then analyze/visualize the data any way you choose, including maps. If you specify the data as public, you can embed it into a website. Here’s the active embedded map of Arizona mines used as sample data above; click on a point to get a pop-up with the name and products of the mine:

Note: Doesn’t seem to display properly in my copy of Internet Explorer 9; works fine in Chrome and Firefox.

Data can also be exported back out again in spreadsheet format, as a static KML file, or as a dynamic KML link that updates if the data changes.

Note: The source code for this app is available at this Google Code page.

Via Slashgeo comes word that Nokia’s Ovi Maps now has a 3D browser-based plugin to compete with Google Earth’s browser plugin. Works in Firefox, Chrome, Safari and Internet Explorer, and supports Mac in addition to Windows for the first three. 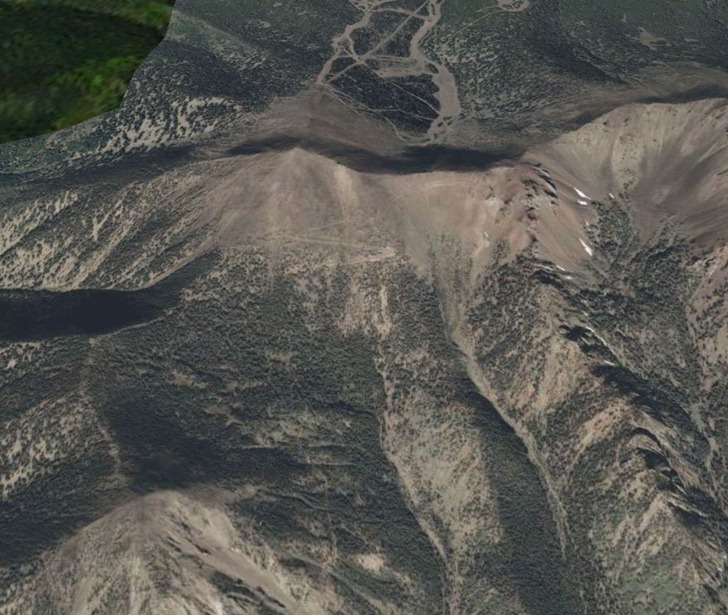 Terrain resolution is fantastic, IMO better than in Google Earth. The only imagery currently available in 3D mode is satellite imagery, and it also looks pretty good, slightly better than Google Earth for my area. One quirk, though, is that for oblique views, only the closest terrain gets high-resolution imagery; notice in the upper-left-hand corner of the picture above, lower-res data is loaded. There is one additional data layer, streets, accessible by clicking on a “man icon”, but coverage appears to be spotty; there are no streets available for my area. The limitations of a browser-only approach become obvious pretty quickly in the lack of data layers, and other options found in the stand-alone version of Google Earth.

Controls are adequate, but not as smooth as those for Google Earth. There are on-screen push-button controls, but they’re pretty clunky; best to stick with mouse controls: 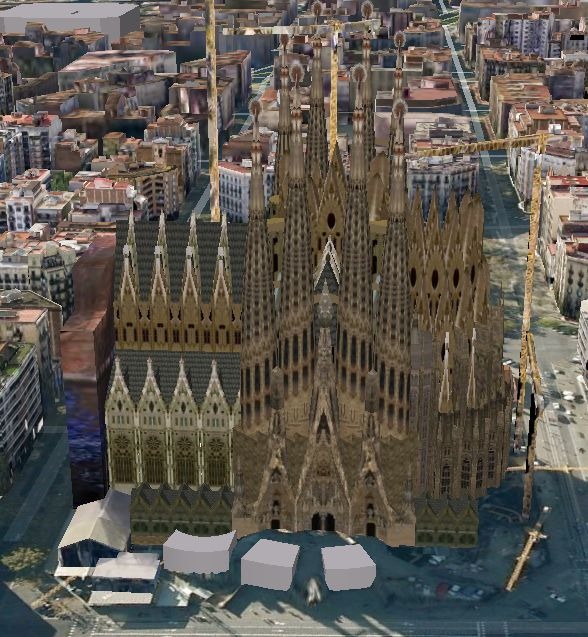 And here’s a comparable view in OviMaps 3D, far superior: 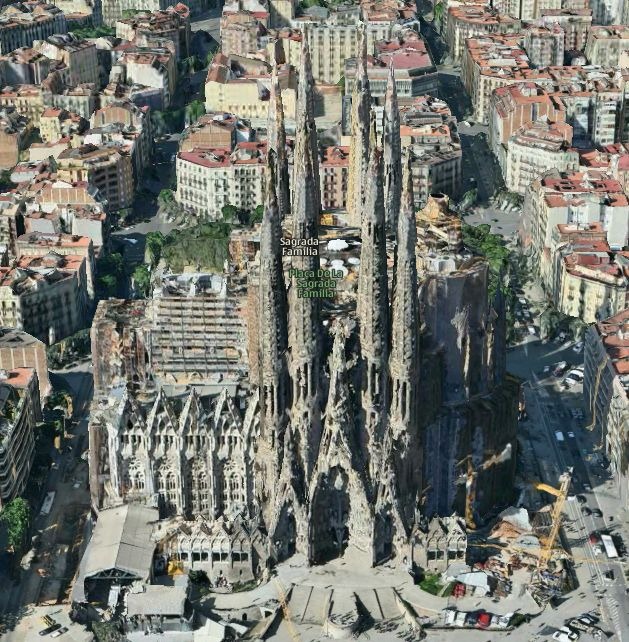 There’s also a button that brings you to Nokia’s 2D Ovi Maps; this one features map data from Navteq: 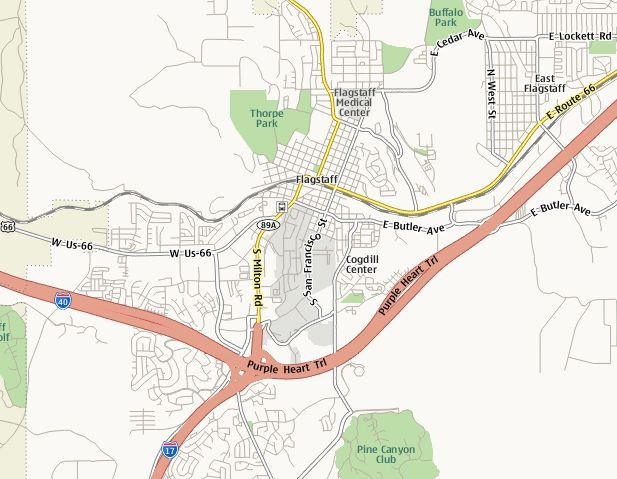 Registering at the Ovi Maps site gives you the option to save favorite locations, share them on Twitter/Facebook, sync them with Nokia phones, and also get driving directions. But in overall features, this falls far short of Google Maps, and I can’t really see a good reason for switching to Ovi over Google for 2D.

The lack of data layers, the inability to add your own data, the browser-only viewing options, and the clunky interface put Ovi 3D Maps behind Google Earth in overall usability. But it does provide a useful alternate aerial/satellite imagery view to complement that from Google Maps (and Bing Maps). And, for the cities that have 3D buildings, Ovi’s views are terrific, much better than Google Earth.

The Surveying.Org website plots a number of useful survey-related data features in a Google Maps interface; select one or multiple data features to display with a checkbox. 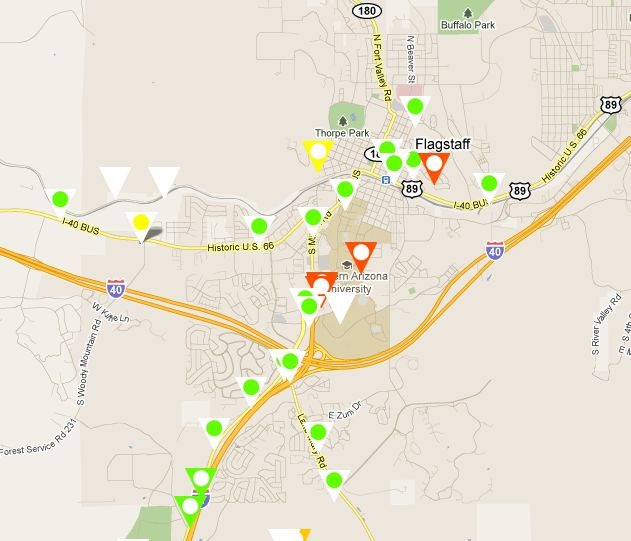 Takes a few seconds for them to pop up. The different symbols correspond to various classes of accuracy for the benchmarks, both horizontal and vertical. Click on a benchmark icon … 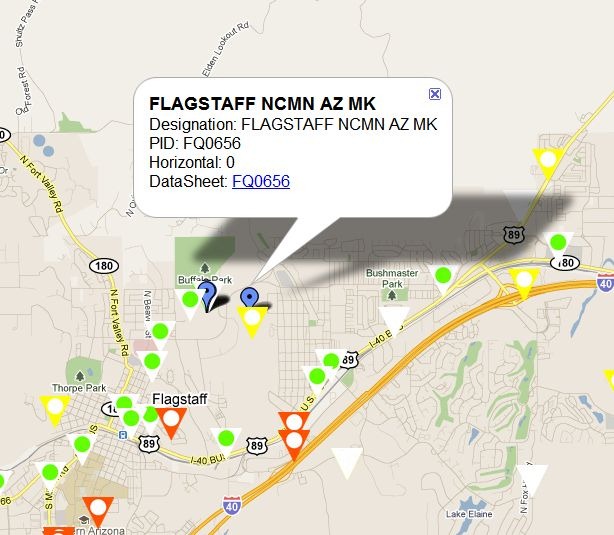 … and get at popup with the name/designation of the benchmark. Clicking on the datasheet link brings up a full datasheet with coordinates, quality information, and more. 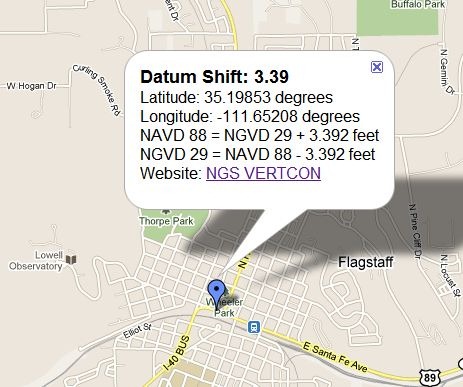 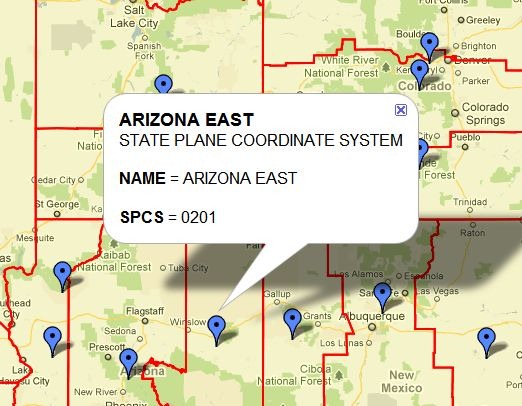 A few of the icons/popups are slightly misplotted, like the second one in the lower left, but they’re close enough to their respective SPCS zones to let you figure it out. 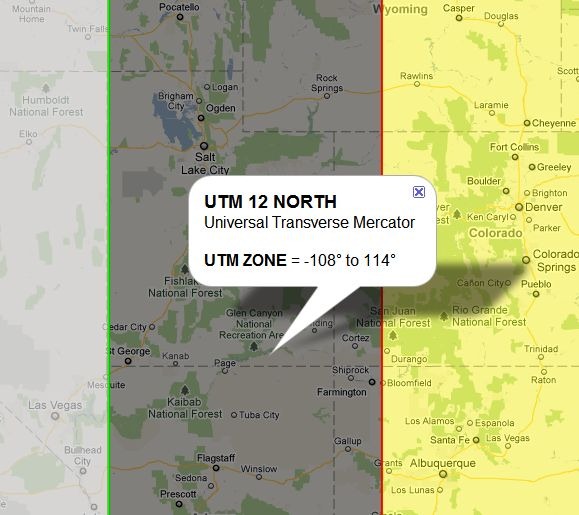 This is the only dataset that’s good for outside the US; UTM zones are displayed for the entire world. 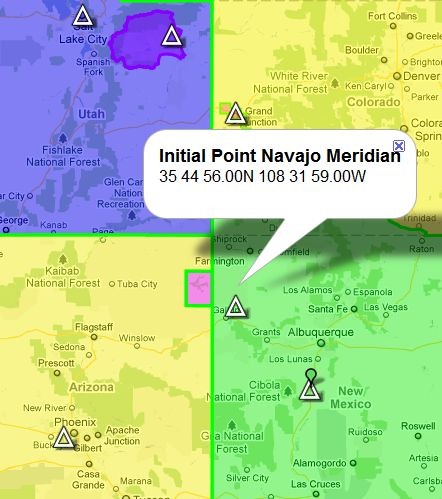 Also slightly misplotted in a few cases, as with the Navajo Meridian above, but close enough to figure out. 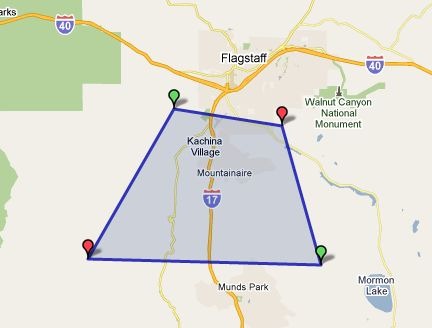 Finally, you can put the web app into either line length or area mode, and then click on the map to define vertices for a measurement. Above, an area is defined …

Live View Information For Your Plane Flight With MondoWindow

If you find yourself on a plane flight across the lower 48 US States, and you’ve got a laptop or mobile phone with an active wireless Internet connection, you have to try out MondoWindow; super-cool! Enter your airline and flight number, and get an annotated view of where your plane is, and what’s visible from the windows. You can also check it out using a randomly-selected flight. Main view is a simulated view of what’s visible ahead …

and right of the plane …

With an “Above” view positioning the plane at its current location in a map view (looks like Bing Maps to me); since most airlines won’t let you use a GPS to monitor your position, this is the next best thing:

There’s an altitude profile as well (though the spike at the beginning can’t be right):

Clicking on the icons in the views brings up either geotagged photos from Flicker for that location, or information about the town located there: 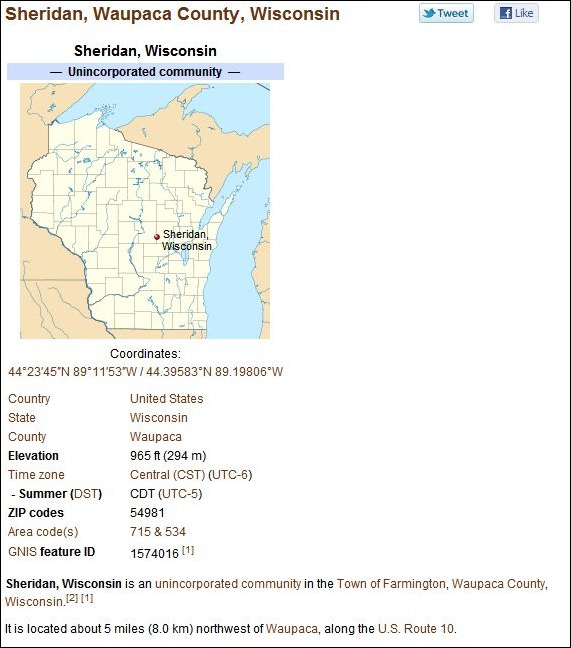 Via geothought comes word of the latest project from the developer of OpenHeatMap, Pete Warden. The Data Science Toolkit wraps up a number of open-source data tools into a combined server/data package that you can install as a VMware image or Amazon EC2 package (downloads/instructions included). You can also set it up as a stand-alone Linux-based server, or install it on a hosting service, with instructions available at the project’s github depository. Geo-related services include:

Also includes a built-in REST/JSON-based API for web services, so you can invoke it from other websites. Big advantage of this approach is that you can set up your own server for these data queries, free of the daily limits other similar services apply. You can test out the current services on the website.

Here’s a talk on this topic by Pete Warden from this year’s GigaOm Structure Big Data 2011 conference:

Published by
Leszek Pawlowicz
in ESRI and Web apps. Closed

If you need to quickly bang out a “hand-annotated” map, you could do worse than ESRI’s Sketch-A-Map site. You have the choice of three different map backgrounds to draw on: 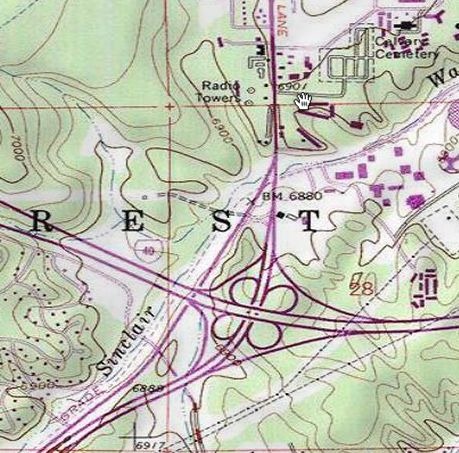 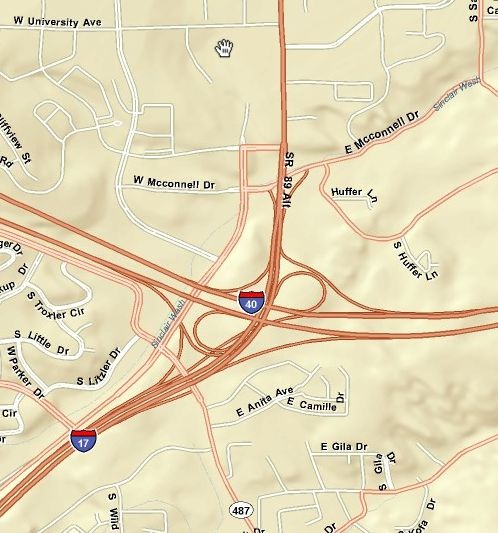 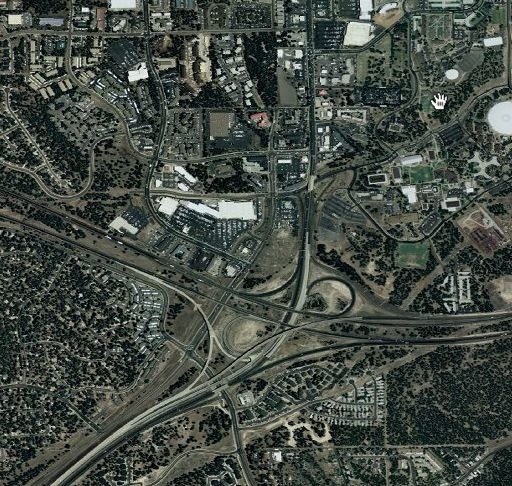 All three images above are at the highest zoom level available, so don’t expect to do house-by-house annotations.

You can zoom in to an area with pan/zoom, or use the “Locate” tool to specify latitude/longitude or address to go immediately to that location. Once there, select your desired drawing tool from the Toolbox:

And annotate your map: 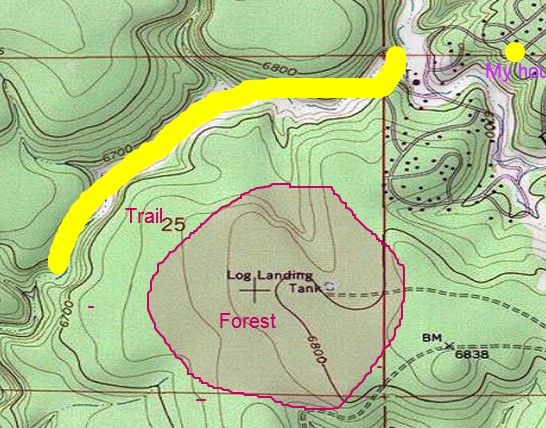 The “Trash Can” icon wipes the map clean of all annotations; unfortunately, there doesn’t seem to be a way to remove a single added object, not even the most recently-added one. So think of this as drawing in pen on a paper map, where you just have to deal with any mistakes you’ve made or start over completely.

Once done, you can use the “Drawing” menu to select “Print or Save”; this gives you the option of either directly printing the map, or saving it in PNG format. Images are saved at the same pixel dimensions they have in your browser window, which will depend on your display monitor, and whether the browser fits the full screen.

The same ESRI site offers a basic geocoder, which lets you pull latitude/longitude coordinates up by address, or the center spot on a map: 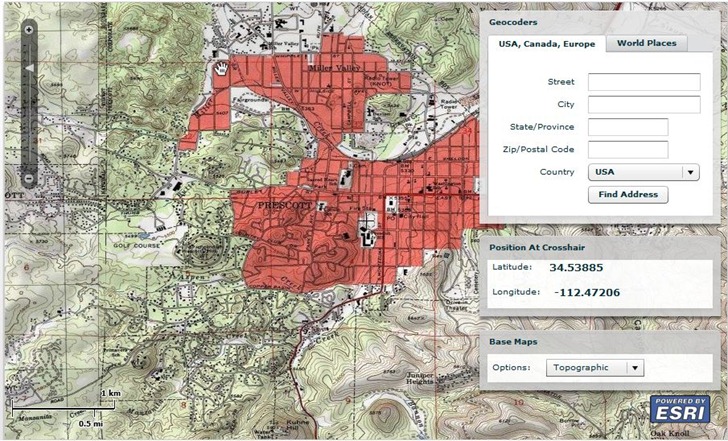