Archive for the 'software' Category

Published by
Leszek Pawlowicz
in cartography, software and spreadsheet. 3 Comments

Claude Henri-Meledo writes to tell me about BeGraphic Lite, a free data visualization tool for Microsoft Excel. I don’t currently have easy access to Microsoft Excel (I’m working in OpenOffice exclusively), so I can’t try it out, but it looks interesting. It apparently does a wide variation of data graphics, not just maps; these include:

BeGraphic LIte works with the free vector graphic map data available at d-maps.com, which now has 7500 maps available (up from 4000 when I posted about the site in August 2009). Edit: You need to download the files in WMF format. There’s a Pro version of BeGraphic in the works for later this year, but the Lite version will still be free and available.

Many raster image formats commonly used in GIS applications have metadata embedded in them that georeferences the pixels (assigns them a coordinate location), and often includes other information like the coordinate system, origin, and datum. Some GIS programs will let you view some or all of this metadata, others won’t. I’ve written a simple GUI front-end program for the GDALInfo utility that will extract the metadata from a compatible image file, display it, and save it in a text file. Download the program folder here, and unzip it to your desired location; keep the executable and the GDAL subfolder in the same folder, otherwise the program won’t work. No installation required, just run the program. Choose the raster image file you want with the “Open File And Read MetaData” button:

END_OF_DOCUMENT_TOKEN_TO_BE_REPLACED

Published by
Leszek Pawlowicz
in GIS and software. 7 Comments

GISVM is a Ubuntu 8.04 Linux distribution packaged as a virtual machine, an OS that can be run in a window inside of another OS like Windows, Mac OS X, or even another Linux distribution. It contains a number of open-source GIS packages already installed, including:

It’s a big 1 GB RAR file download that decompresses into 3 GB; if you don’t have a program that handles RAR compression, try the free program 7-Zip. To run the virtual machine, you’ll need to install either the VMWare Player or VirtualBox; I’d recommend the latter since it’s been released as open source by Sun, and also doesn’t require registration for the download. Players are available for Windows XP/Vista, Mac OS X and Linux for both platforms. Since you’ll be running two operating systems simultaneously, the demands on your computer can be significant. I wouldn’t run it in less that 1 GB of RAM for Windows XP or Linux, and 1.5 GB for Vista or Mac OS X.

From VirtualBox, use the Virtual Disk Manager in the File menu to Add the decompressed vmdk file to your list of hard disks: 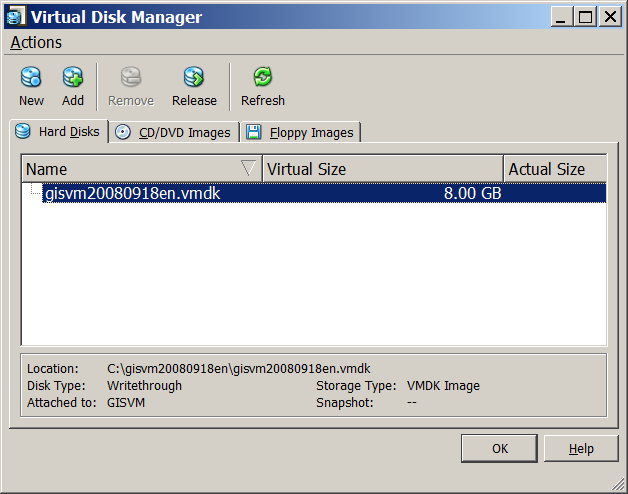 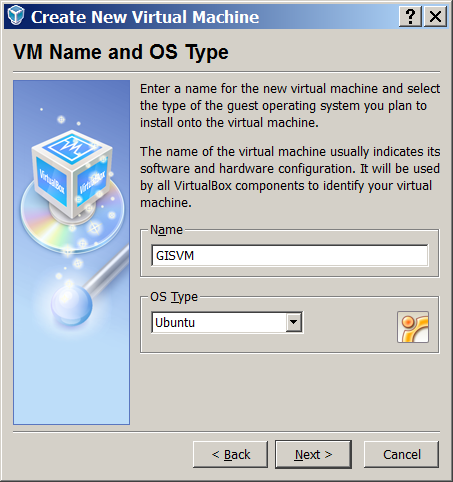 In subsequent dialog windows, give it as much RAM memory as you can spare, and select the vmdk hard disk image as the Existing hard drive. Once you’re done, click on the Start button and the GISVM will open up in its own window, like the one below running on my Windows Vista system: 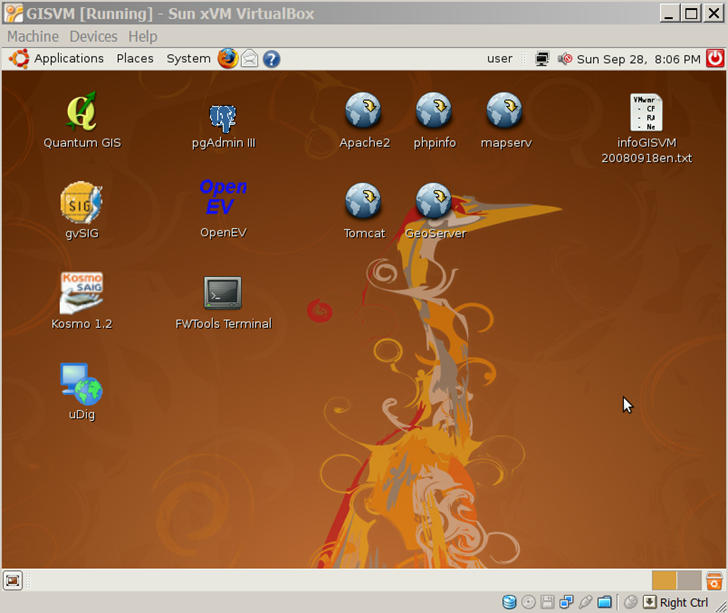 One thing you’ll discover quickly is that as soon as you click or type anywhere in the virtual machine window, all mouse/keyboard input is confined to the virtual window, and you won’t even be able to move the mouse cursor out of that window. Pressing the right Ctrl key on your keyboard will release this control, so that you can access your regular OS with the mouse/keyboard again. The infoGISVM*.txt file in the upper corner is worth a look, since it contains basic information about the installed programs, and the basic user passwords.

On my computer system (2.4 GHz Quad Core, 3 GB of RAM, 1 GB assigned to GISVM), the virtual OS machine is very responsive, and programs open up almost as quickly as they do running natively. Here’s qQIS in the virtual machine window: 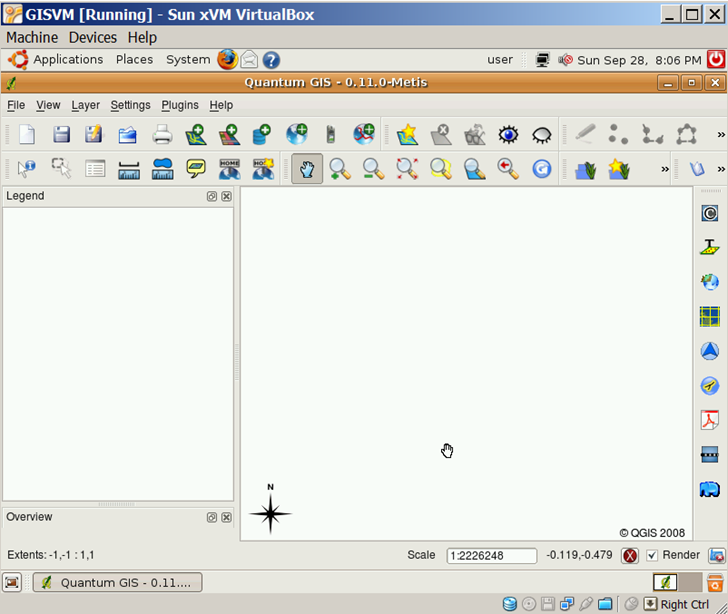 I would have liked to play around with it a bit more, but I ran into a major issue: the largest screen resolution you can get in this virtual machine is 800 x 600, and it seems to be impossible to add additional resolutions. This might be a hardware-related issue, but I don’t think so, since the screenshots on the GISVM website also appear to be in this resolution. I haven’t run in 800 x 600 in 12 years, and I’m not about to go back to that now.

I’ve run into this problem before with Ubuntu 6 and 7, where you’re limited in your selection of screen resolutions if you’re running it as a virtual machine or on a remote machine using VNC with no monitor attached. It’s pretty retarded that this is still a problem in Ubuntu 8.04, and IMO another sign that Ubuntu isn’t ready yet for real people. Don’t tell me it can be fixed in the xorg.conf file; A, it can’t (I’ve tried), and B, regular non-techie users shouldn’t have to try to sudo fix this problem in an arcane text file.

If you can live with an 800 x 600 screen resolution, and want to try out Linux apps from Windows or Mac, GISVM is worth a look. If not, I’d wait until a version comes out that supports larger virtual screen resolutions.

Addendum: See the comments section for solutions to some of these problems.

Create Your Own Gapminder Animated Charts

Published by
Leszek Pawlowicz
in software and Web apps. Closed

Gapminder is a flash-based tool for creating animated charts based on various parameters and indicators, including geographic areas. Here’s a TED talk showing examples of uses by its developer, Hans Rosling:

Up until recently, you could look at Gapminder charts for specific datasets at the website, but not create your own. Google, which bought the Gapminder technology in 2007, recently released a Google Gadget that lets you create your own Gapminder charts that can be embedded in a web page. You’ll need a Google Docs account, and also need to add the “Motion Chart” gadget from this web page. Once added, it can be accessed from the charts/gadgets button in a Google docs spreadsheet.

Published by
Leszek Pawlowicz
in data, GIS and software. 1 Comment

Continuing on from the first post in the series …

MetaCat: “Metacat is a flexible metadata database. It utilizes XML as a common syntax for representing the large number of metadata content standards that are relevant to ecology. Thus, Metacat is a generic XML database that allows storage, query, and retrieval of arbitrary XML documents without prior knowledge of the XML schema.”

Metascribe: “The NOAA Coastal Services Center’s MetaScribe tool is designed to reduce significantly the labor required to produce metadata compliant with the Federal Geographic Data Committee (FGDC) Content Standard for Digital Geospatial Metadata (CSDGM). This software tool takes advantage of the fact that, within a collection of records for a given data type, the records are generally very similar in content, with only a few fields or phrases changing from one record to the next. MetaScribe delivers the greatest savings when used to create a collection of similar records. In fact, this tool is not appropriate for the creation of multiple metadata records with little redundant content.”

Morpho: “Morpho allows ecologists to create metadata, (i.e. describe their data in a standardized format), and create a catalog of data & metadata upon which to query, edit and view data collections. In addition, It also provides the means to access network servers, in order to query, view and retrieve all relevant, public ecological data.”

NPS Metadata Tools And Editor: “The NPS Metadata Tools & Editor (MTE) is a custom software application for authoring, editing, and managing National Park Service (NPS) metadata. The MTE operates either as an extension to ArcCatalog versions 8.3/ 9.x or as a standalone desktop application. The MTE is intended to be the primary editor for metadata that will be uploaded to the NPS Data Store and produces XML metadata based on the NPS Metadata Profile. Metadata editing is accomplished with editing stylesheets that transform an XML metadata file into an editable record.”

SHAME: “SHAME is a library that leverages editors, presentations and query interfaces for resource centric RDF metadata. The central idea of SHAME is to work with Annotation Profiles which encompasses:

USGS Formal Metadata: A suite of metadata tools, including mp, cns, xtme, Tkme, mq, and DBFmeta. The last is a tool “designed to facilitate the documentation of data contained in DBF files”

GeoNetwork opensource: “GeoNetwork opensource is a standards based, Free and Open Source catalog application to manage spatially referenced resources through the web. It provides powerful metadata editing and search functions as well as an embedded interactive web map viewer. This website contains information related to the use of the software.”

The Big List Of Free GIS Programs – S Through Z

Published by
Leszek Pawlowicz
in GIS and software. 3 Comments

The final part of the series. Part One, Part Two, Part Three. All parts will be regularly updated as more programs come to my attention.

END_OF_DOCUMENT_TOKEN_TO_BE_REPLACED

The Big List Of Free GIS Programs – N Through R

Published by
Leszek Pawlowicz
in GIS and software. 6 Comments

Part three of this series (part one, part two).

END_OF_DOCUMENT_TOKEN_TO_BE_REPLACED

The Big List Of Free GIS Programs – I Through M

Published by
Leszek Pawlowicz
in GIS and software. 1 Comment

I plan to look at this one in greater detail in the future – looks like it has some really useful capabilities. Here’s a list of chapter titles from the Applications Guide to give you a feeling for what it can do: