Archive for the 'DXF' Category

Published by
Leszek Pawlowicz
in AutoCAD and DXF. 1 Comment

AutoCad WS is a free cloud-based service from AutoDesk (registration required) that lets you upload, view, share, edit  and download AutoCad files (DXF and DWG) online; there are also apps for remote viewing and editing on Android and iPhone smartphones. You currently can’t create a new file in the editor, but you can either create a DWG/DXF file using a free editor like DraftSight and upload it, or take a currently existing file, edit it to remove all features, then save it as a different name.

This is by no means a substitute for the full version, but it does contain a fair subset of the basic functionality, with drawing/editing/annotation tools, and layer support: 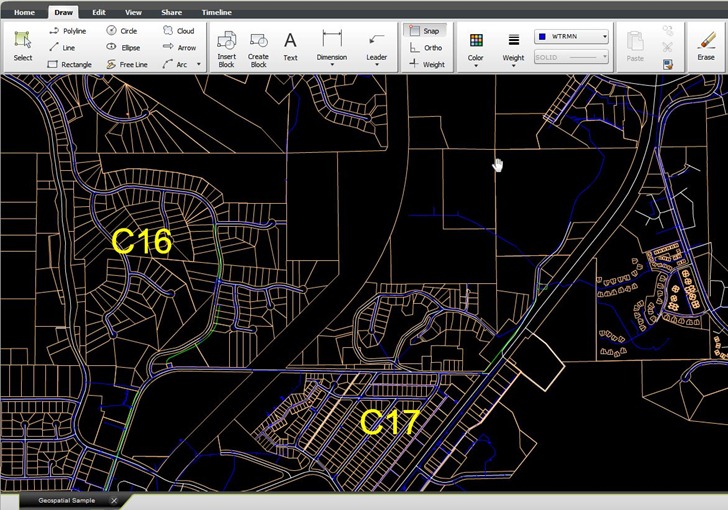 Even though one of the sample drawings included is labeled “Geospatial Sample”, there’s no native support for georeferencing or geospatial coordinates. If you load in a file with geospatial information, add/edit features, then save it, it will maintain the geospatial referencing.

If your file is in some form of Mercator coordinates, like UTM, you can calibrate/reference fairly accurately it against a Google Maps view in the app. Here’s a rough DXF outline of Indian Island in Eureka, CA, traced from a UTM topo map, and uploaded to AutoCad WS: 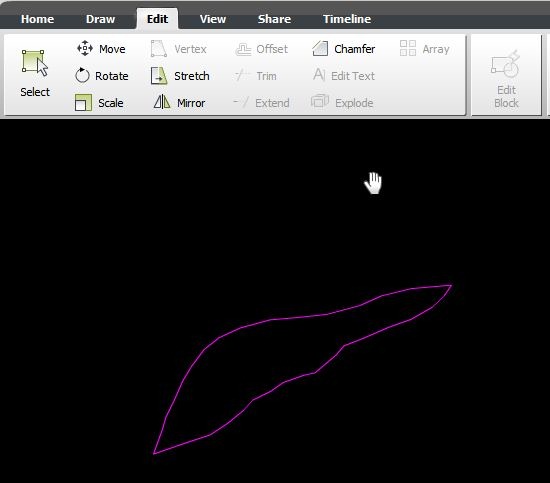 From View, I turn on a Google Maps background; this also brings up a control for aligning the drawing with the background: 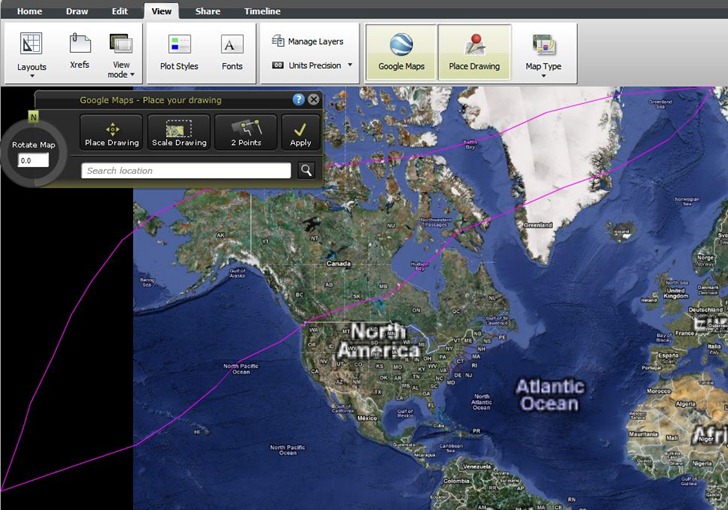 The feature fills the screen, and obviously isn’t calibrated to the correct location. Using the Search Box, I can bring up the Google Maps view of Eureka, CA, then use the Place/Scale/2 Points/Rotate functions to align the outline with the actual island: 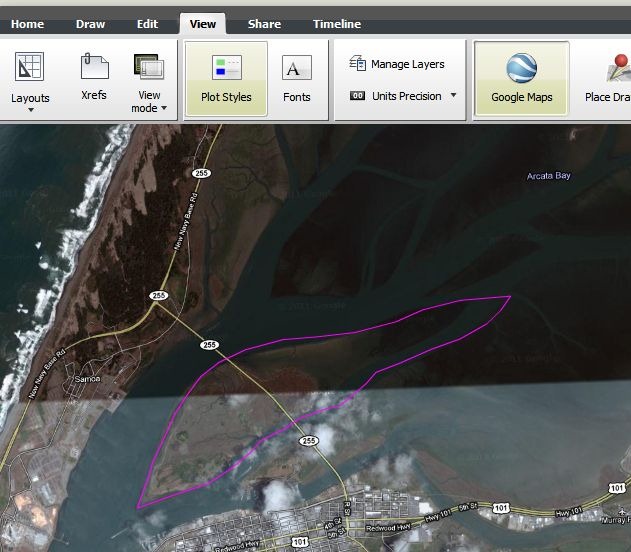 I don’t have AutoCad, so I can’t try this out, but KML Tools Pro has AutoCad DVB macros that let you select features in AutoCad and convert them to Google Earth’s KML format; similarly, another macro will let you import a KML file into AutoCAD. From the website:

From AutoCad to Google Earth:

From Google Earth to AutoCad:

The current download site is in Greek, but the link to the downloadable file is obvious at the bottom. An older version of the page used to be available at this link, but isn’t currently working; you might try the cached version of the page from Google.

For converting KML files to DXF format, you can also try this online converter.

I’ve posted before about Digipoint (version 1 and version 2), a web app that lets you select points in a Google Maps interface, then export their coordinates in a variety of formats. Version 3 of Digipoint is now out, with some modest improvements:

Still supports the same export formats as before: CSV, TXT, TAB, BLN (Surfer), GPX, KML, DXF and shapefile. Versions one and two are still available if you want them, but there’s no good reason to use them anymore.

Published by
Leszek Pawlowicz
in data, DEM and DXF. Closed

If you have a set of data points randomly distributed in space, and want to create a basic grid of evenly-spaced set of data points derived from this data (nothing fancy, like curve fitting or Kriging), QuikGrid is blazingly fast at this task. For example, here’s a evenly-spaced set of 625 elevation points (25 x 25) downloaded using the Zonums Terrain app, loaded into QuikGrid and displayed as a set of contours, and coloring representing different heights: 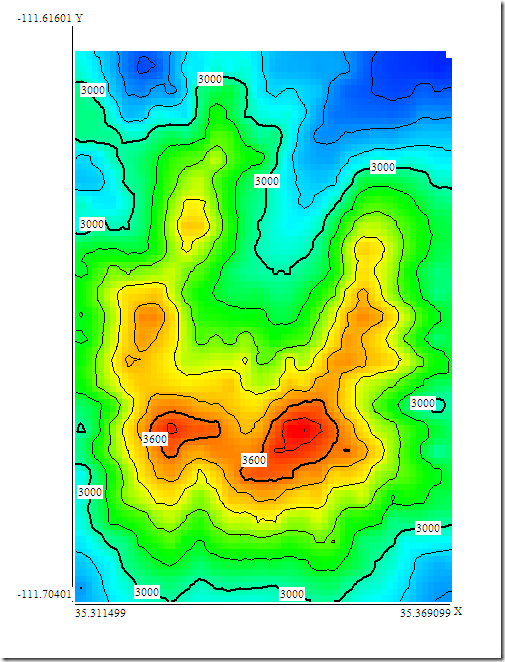 For the same area, I also downloaded a set of 625 randomly-selected points, which QuikGrid can automatically grid, contour, and display in a similar fashion, essentially instantaneously: 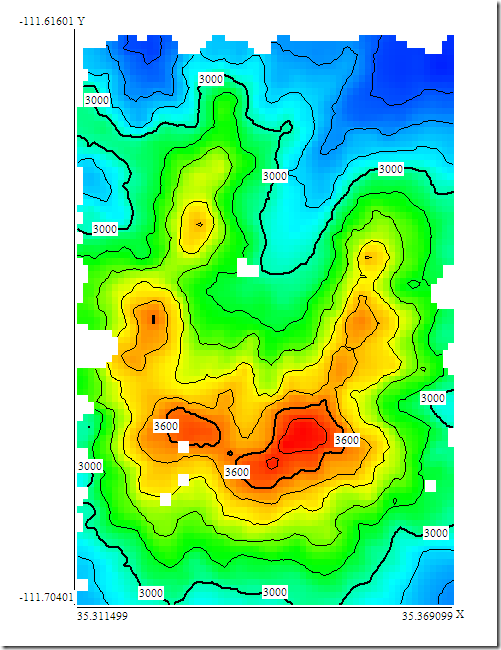 In some areas, the spacing between random points is too great for QuikGrid’s default distance cutoff tolerance, and it fills in those blanks with data values of zero. But by adjusting the tolerance, it’s possible to fill in some of those gaps: 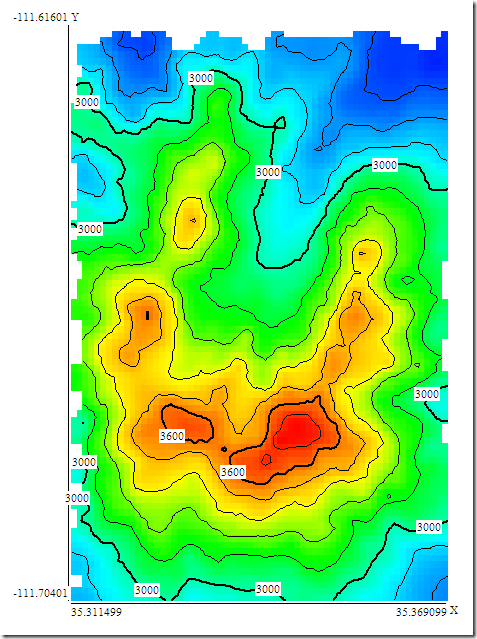 Some gaps on the edges, where it has trouble filling in the remaining gaps. Comparing this contour image to the evenly-gridded surface at the top, there are some differences, especially in locations where values changes rapidly. But for a basic approximation, it’s not bad, and offers a quick-and-dirty alternative to more complicated gridding processes.

QuikGrid can also visualize grids in 3-dimensions as well: 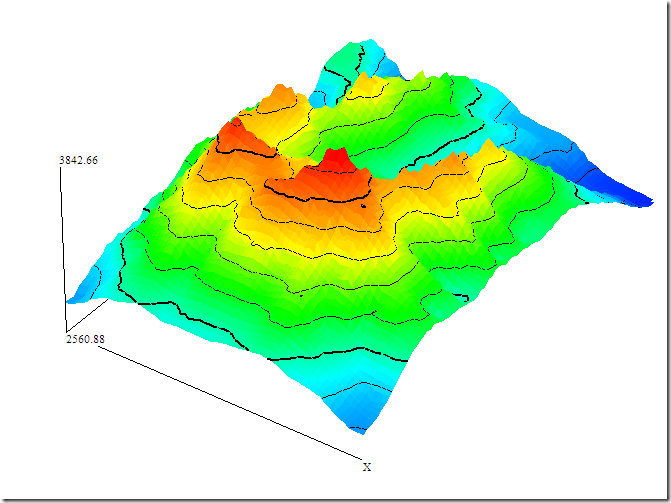 Import formats supported by QuikGrid include data triplets with a variety of acceptable inputs for position, including variations on lat/long in degrees/minutes/seconds. If you have decimal lat/long, use the “Input metric data points” option, but be aware that the y-value will be longitude, and the x-value latitude, as in the examples above. It also accepts data point input in DXF and Submetrix format, as well as grid input in ER Mapper Raster, USGS 1-degree DEMs (aka 1:250K DEMs) and QuikGrid’s own grid format. Generated grids can be saved as xyz triplets, Surfer, QuikGrid and ER Mapper formats; you can also export contours and grids in DXF format, and grid surfaces in VRML. There are many other features, including a scripting language, and various display and labeling options.

The helpfile is comprehensive, and well-done, and includes instructions on running the program in Linux under the Wine emulator. The C++ source code is also available, released under the Gnu GPL.

Loading An AutoCAD DXF File Into A GPS Or Google Earth

A reader from Canada asks, “Is it possible to load an AutoCAD file (dxf?) into my Garmin GPSMAP 60csx?”. I don’t know of a free one-step solution, and if any reader knows of one, I’d appreciate. However, using some of the procedures described in previous posts on this blog, it can be done fairly easily.

1. Convert the DXF file to a shapefile using the MapWindow DXF To Shape Converter. Points, lines and areas will have to be converted into separate shapefiles.2. If the coordinates of the DXF are not in the native coordinate system for most GPS units (latitude/longitude, WGS84), you’ll need to re-project the new shapefiles from their current coordinate system (e.g. UTM) to the GPS native system using MapWindow.

It’s even less painful than it sounds; should take no more than about five minutes to put a DXF file into a GPS, once you have all the software you need installed.

Addendum: You would also follow the same basic procedure if you wanted to display a DXF file in Google Earth, but instead of step 3 above, you would convert the shapefile created in step 2 into a Google Earth KML file using one of the converters I’ve posted about previously.

Note 1: See this series of posts for info on converting shapefiles to KML format.

END_OF_DOCUMENT_TOKEN_TO_BE_REPLACED

Note: See this series of posts for info on converting shapefiles to KML format.