Published by
Leszek Pawlowicz
in geotagging, GPS and GPX. Closed


Prune is a Java-based GPS-track viewing and editing program that runs in Windows, Mac and Linux. When I last posted about it, the photo geotagging capability was a bit awkward – it required you to manually link a photo to a trackpoint, not automatically correlating trackpoints with photos based on time like most photo geotagging software. Version 4.1 is now out, and it now can automatically correlate and tag photos with data from a GPX track file. You need to have EXIFTool installed on your system; for Windows, put it the same folder as Prune, or into a system folder. Open a GPX track with File => Open Command, select either individual photos or an entire folder with File => Add Photos (or Photo => Add Photos). Select the photos you want to geotag in the file list at left, then select Photo => Correlate All Photos: 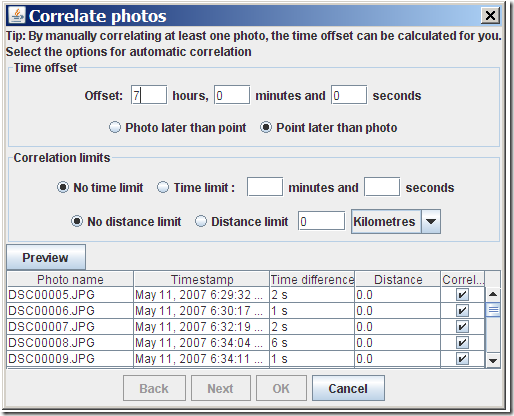 Prune lets you adjust for the time difference between the camera time and the GPS time (the former is usually the local time, the latter UTC). You can also set the correlation limits, i.e. how close the time or distance a trackpoint needs to be in order to be correlated with a picture. After correlating photos with track, you still have to select Photo => Save to EXIF to have the position data written into the picture’s data: 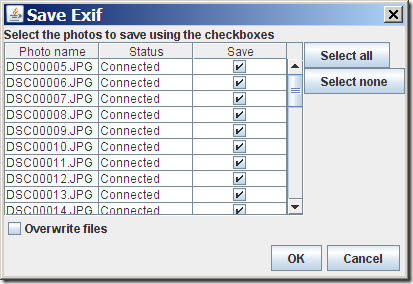 If you leave “Overwrite file” unchecked, the original will be saved with “_original” appended to the file extension; it would probably make more sense to append it to the filename instead, but that’s apparently a limitation of EXIFTool.

Another useful new feature in Prune is the ability to create a GPX file from an imported set of geotagged photos. Add the photos to the file list with the Photo => Add Photo command, select File => Export GPX, and Prune will create a GPX track file, connecting all the points where a photo was taken in the correct order.

Other new features in Prune:

Prune is released under GPL, and there’s a copy of the source code available for download. Not sure I would use Prune instead of GeoSetter for photo geotagging in Windows, but it looks like a great free alternative for Mac and Linux users, who have fewer free geotagging options.