Route Converter, covered in a previous post, is a program for editing GPS routes, and converting them from one format to another. The biggest complaint I had about the previous version is that it didn’t have a visual interface for viewing and editing routes. The program’s author writes to say that he’s now added a Google Maps interface that not only displays the route points, but lets you edit them within that interface: 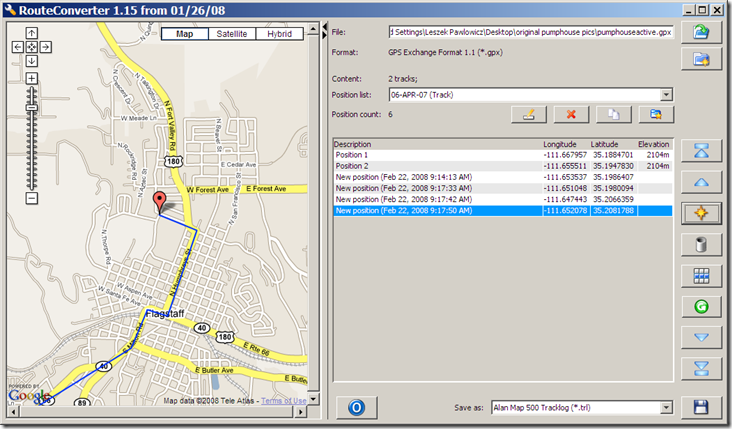 Add, delete, and move points within the list using the buttons at right; they’re not directly labeled, but a popup label will show up when you hover over them with the mouse. Click on a position in the list, and that position will be shown in the Google Maps window with the red pin; click and drag to move that pin to wherever you want, and the position in the list updates automatically. To enter a position directly, or to change the point description, double-click on the appropriate field in the list to select it, and enter the new data.

Other new features include a few additional route formats and bug fixes. While it still doesn’t support as many formats as ITNConv, I now prefer RouteConverter’s interface. The version of RouteConverter described here is for Windows; the download page also includes versions for both Linux and Mac, but they’re labeled “experimental”, and “reduced functionality”, and I haven’t tried them myself.