Published by
Leszek Pawlowicz
in Garmin and GPS. 6 Comments


First in a series on tools for creating your own vector maps for Garmin GPS units.

cgpsmapper – cgpsmapper is a compiler that converts geographic features in the textual mp (Mapa Polska) format into the .img format required for Garmin GPS units. cgpsmapper was one of the first tools for making your own Garmin maps, if not the first. Since some other free tools require it for full functionality, it’s pretty much a must-have program for Garmin map creators.

The free version, available at the download page, supports compiling basic maps and many Garmin-compatible features, but other advanced features like POI indexing, routing and and addressing aren’t supported. Oher limitations of the free version include:

Stan Kozicki, the author of cgpsmapper, also sells a number of commercial version that add progressively more features as you pay more money. The cheapest shareware version is $30, and adds direct support for shapefiles as input data, some indexing support and a few other features. Since all the other commercial versions cost $300 and up, they’re really for serious mappers only; but all shareware versions that don’t include routing come with a 30-day trial, so you can give them a test run.

cgpsmapper has a command-line-only interface, which makes it a bit cumbersome to use; fortunately, a number of the free map editors I’ll cover in future posts can interface directly with it. But even if you mainly use the map editors, you’ll want to download the cgpsmapper manual, as it’s the principal reference not just for the program, but for the mp map file format. mp is a text-only format, and it’s possible to create mp files using just a simple text editor; sample mp files are included in the program directory. For simple custom maps, you can just work with a map editor, and don’t really need to worry about the mp code. But if you want to take advantage of all of cgpsmapper’s features, you’ll really need to learn at least something about working directly in the mp format, no matter how painful. I wouldn’t create maps directly in this format with a text editor unless it only has a few features, but there are ways to modify map characteristics and feature definitions easily if you get familiar with the mp format.

It’s also possible to get maps compiled for free with many of the features only available in the shareware versions. Stan has installed a version of the compiler on the MapCenter2 website, a collection of free Garmin maps created by enthusiasts over the years. If you register with the site, you can upload your .mp map files and have them compiled by a professional-grade compiler that supports many of the features of the shareware versions. And as a bonus, you won’t get those annoying “map created by” tags on every map segment. There are several catches:

Note: MapCenter2 appears to be down, and its future status is unclear. You can still download maps from the MapCenter1 site, but it doesn’t allow map compilation.

If you want to see a sample of the feature types supported by cgpsmapper, there’s a free “test pattern” of features available at the GPS Maps site; scroll down to just above the “Fun Stuff section. This program will install the test pattern in Garmin’s MapSource and/or BaseCamp programs: 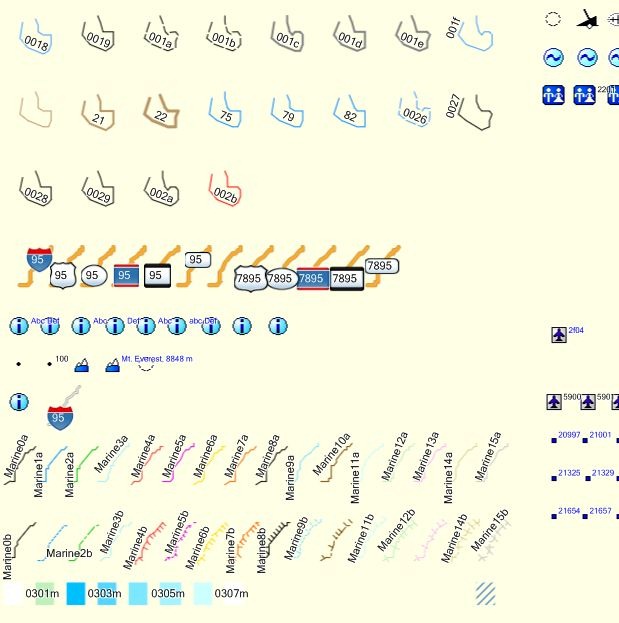 A similar but slighly different test pattern is available in the Files section of the Yahoo Map Authors forum: 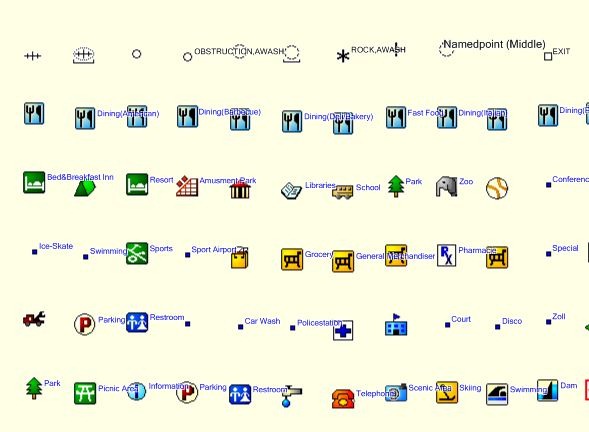 These pictures only show a small subset of the features in each full test pattern. What’s more, it’s possible to create your own custom icons, line patterns and area fill patterns, and use them as substitutes for, or as additions to, standard Garmin feature iconography. You do this by creating custom TYP files that describe the new custom feature appearance, and define the feature ID associated with them. I wouldn’t say that it’s an easy process, but it can be done, and gives you a lot of freedom to customize the map appearance. I’ll cover a few free tools that simplify the process of creating this custom feature iconography in future posts.