GPSMapEdit and its clone GPSMapEdit++ are the most fully-featured free Garmin map editors currently available, but there are a few other options available as well.

MapMan (aka Map Manipulator) – A decent feature set, and a good number of input formats: 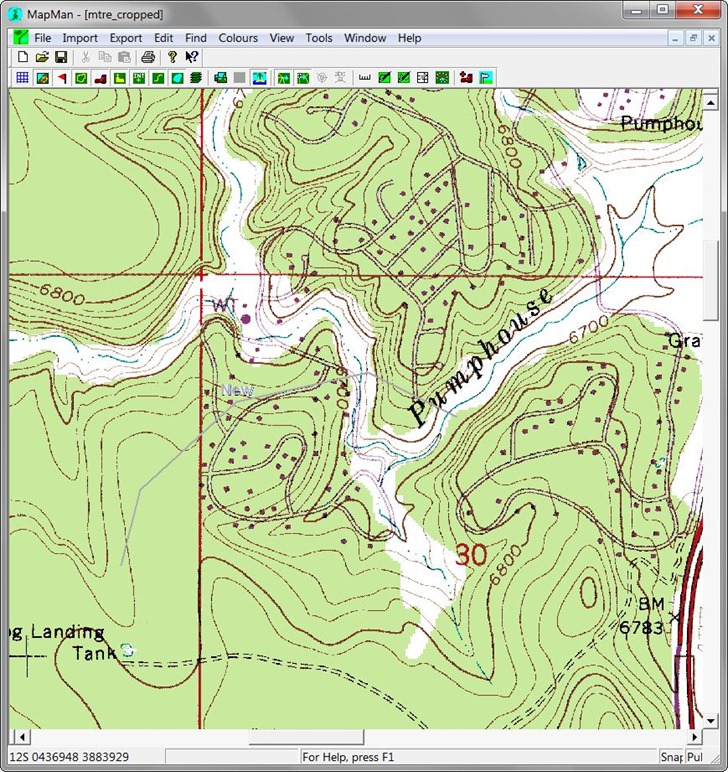 Drawn features can be exported directly to a GPS, saved in GPX format, or converted into Garmin vector map formats (mp and img).

There’s a tutorial section at the website, and a full help file; the latter is in the .hlp format no longer supported by default in Windows Vista and 7, so you’ll have to install an update to view it. But even with the tutorial and the help file, I found the program unintuitive to use, and a bit buggy. For example, it rejected a GPX file created by EasyGPS, a program written by the creators and definers of the GPX format. And after I tried loading in another GPX file, it required me to define a geographic “map space” to put the data into; GPSMapEdit does that automatically, and dynamically. And the background map you see above disappeared spontaneously, and I couldn’t figure out how to get it back. All this in five minutes of use.

If GPSMapEdit weren’t available, and if I weren’t already up to speed with that program, I might spend some more time learning MapMan. As it stand, I don’t really expect to use it that much. YMMV.

After the 30-day trial period, you need to purchase/register MapMan to keep the following features:

GlobGPS: A very basic feature set (draw lines, points and area), along with the ability to either calibrate a background image for tracing, or use an Ozi .map image: 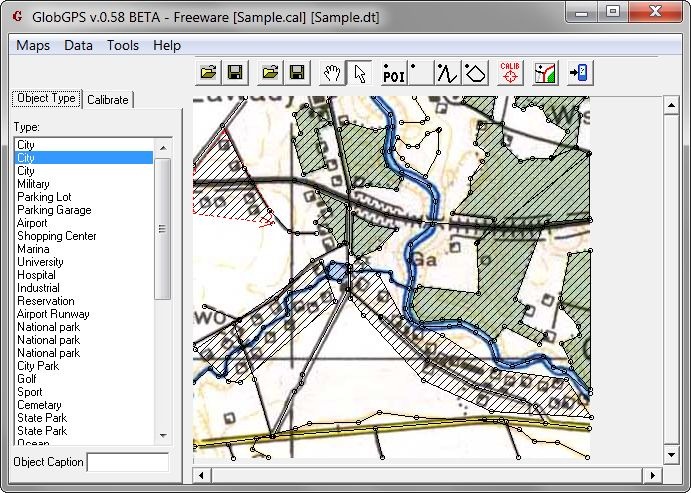 Turn the map image off to see what vector data has been created: 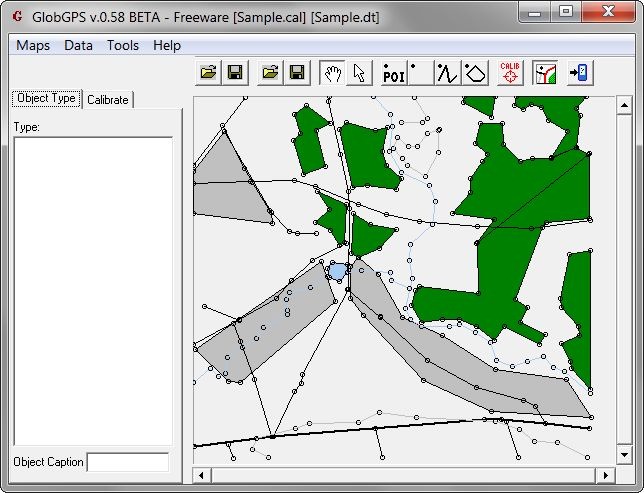 The feature set is severely limited, but to me that’s a big advantage of this program over more complicated ones; it’s a lot easier to trace and create a simple set of vector data with this program compared to MapMan, or even GPSMap Edit. Four minor issues:

– I wish you could save the data directly in the .mp text format, but the program insists on always creating a binary .img file; you can always load this into GPSMapEdit and then convert it to .mp format if you like.  Turns out it does save the .mp code in a file called output.txt in the main program directory; this gets overwritten every time you generate a new set of data, so if you want to keep it, you need to copy it to a different directory.

– Map calibration is done in latitude/longitude only, which can lead to errors on maps drawn in other coordinate systems. If I get a chance, I’ll try to put together a simple utility that will take a GeoTiff, reproject it to lat/long, and automatically generate a calibration file for use with GlobGPS.

– Default directories for loading and saving files are set in the Options section, and the Save directory isn’t user-changeable when you create a .img file; it always saves the .img file in the default save directory, not in the directory with the original .cal file or a directory you can choose when you creat the .img file. The only practical way around this is to create a general directory for loading and saving files, setting this as the common default location, and copying all of the data files you need for your project into it from the start.

– You can’t change the map ID number, it’s always set to 10000019; you’ll need to load the data into another program to modify it. GPSMapEdit can do that, as can some of the utilities I’ll be covering the future.

The program doesn’t seem to be under development any more; last version was released in April 2003. Even so, for quick Garmin vector map creation by tracing raster maps, it’s pretty good; a case of how for some applications, less can be more.

GMap: Included for completeness only. Linux only, which is odd, since getting Linux to work with Garmin GPS units is a chore. Last version is dated 6/2007, so I’m going to guess it’s no longer under active development. Still, it’s there if you insist on doing it with Linux: 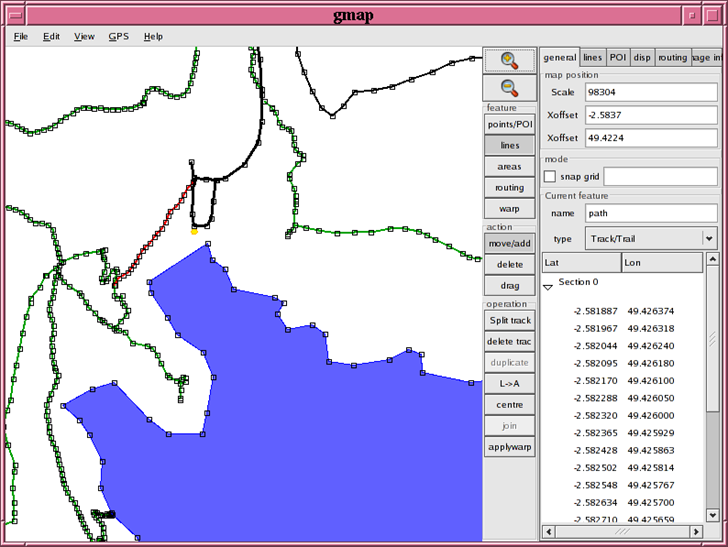 Create-a-map: Here’s an oddity – a web-based .mp Garmin map file creator. Designed to be used for creating golf course maps to be used with a Garmin GPS, but you can always convert the type later on. To create a Garmin .mp file:

Choose the feature type from the dropdown

Click on the Google Map interface at left to add points

Click “Convert” to finish defining the feature on the map 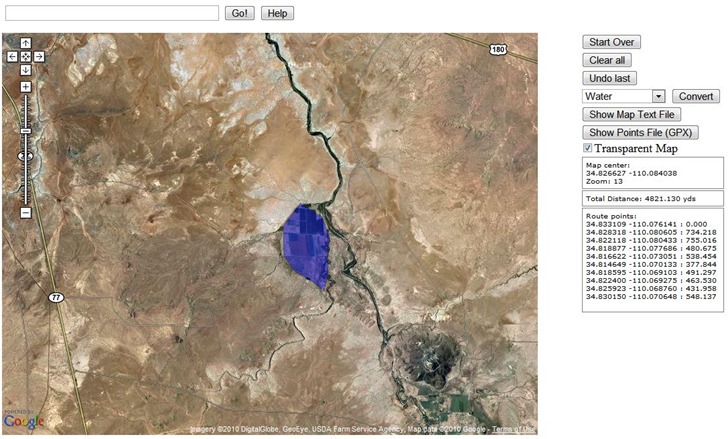 Then click on “Show Map Text File” to bring up a pop-up window with the .mp text vector data, which you can copy into a text editor and save as a .mp file: 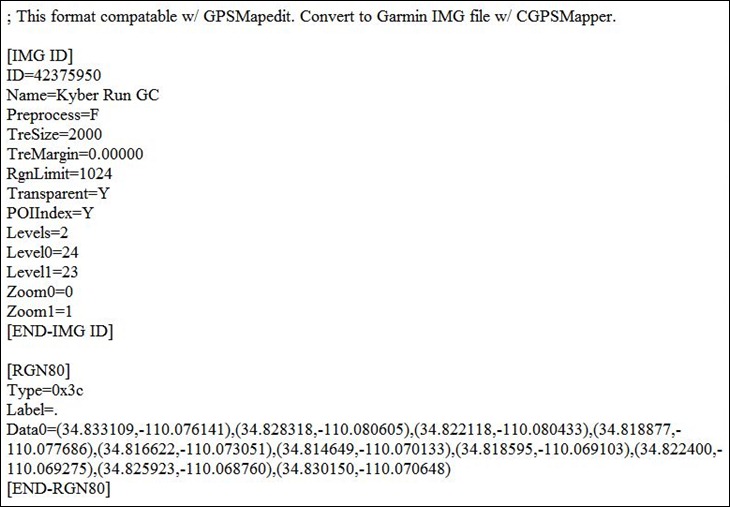 You can then compile this .mp file directly with cgpsmapper, but more likely you’ll want to open it in a editor like MapMan or GPSMapEdit. Not exactly a large feature set, and not complete by itself, but a useful utility to have.