Locr is a web album site oriented around geographic location, where you can upload geotagged photos, share them, and have them display in an album or on a map interface. Basic accounts are free, and while I assume that premium accounts will be available for a price at some point, I can’t seem to find any mention of that on the site. Geotagging can be done with separate software called “locr GPS Photo”; the software is free, and available for download even without registering for the site. Make sure you download the PDF manual as well, as you’ll probably need it. You can either manually geotag a photo using a Google Maps interface, or use GPS data to assign geotags. Here’s the basic interface: 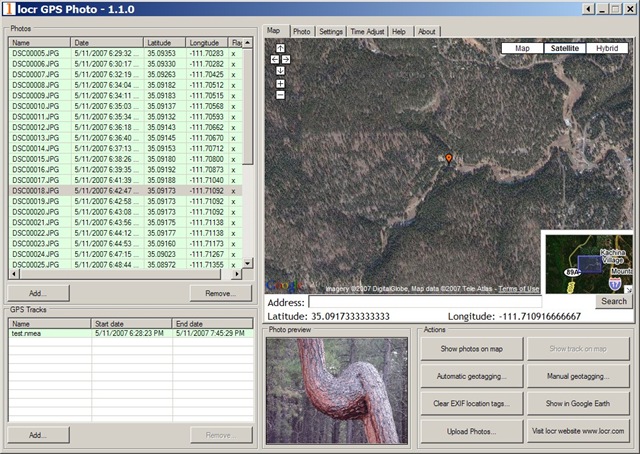 The software does work, but it’s not without quirks, particularly for automatic geotagging with GPS data.

1. One of the biggest pains of locr is that it doesn’t accept standard GPX files for geotagging – it requires nmea files. You can convert GPX to nmea using GPSBabel, and the following procedure from the help file:

Make sure you have the latest version of GPSBabel and the GPSBabelGUI. And be prepared for problems. In particular, if any of your GPX trackpoints don’t have a timestamp, GPSBabel won’t be able to create the nmea file, and will generate an error message. You’ll have to open the GPX file in a text editor, manually delete the trackpoints with no timestamp, then save the file as a new GPX file before using GPSBabel to convert it to the nmea format. Hopefully, locr will recognize the need to accept the standard GPX format in their program, and add it as an option sometime soon.

2. Sometimes, it won’t tag a photo in a series; if that happens, click on the “Clear EXIF location tags”, and that may be enough to get it to work.

3. The geographic location is written in the EXIF tag, but some programs (like Picasa) can’t read EXIF tags modified by locr. 9/3/08: I’ve heard this is no longer an issue. The problem apparently results from a problem that Picasa has reading the GPSVersionTag created by locr. There’s a fix for this: download EXIFTool, a free command-line utility for EXIF tags, re-name the executable file to exiftool.exe, copy it to the directory with the photos in it, and from the command line execute the following command:

This will re-write the GPSVersionID tag to one that Picasa recognizes, and Picasa will then pick up the geotagging information in those photos.

Addendum: Check this follow-up post for a GUI for EXIFTool.

On the plus side, manual photo geotagging is fairly painless – zoom in to the area in a Google Maps interface, select the photo, and click on the “Manual geotagging” button to tag it. You can also enter an address into a search box, and have that be automatically geocoded for you. You can then move the marker manually after the initial tagging to fine-tune its position. Select a group of photos that have been geotagged, and click on the “Show photos on map” button, and their positions will be indicated on the Google Map. You can also select a set of photos, and create a KML file of thumbnails for display in Google Earth with the push of a button.

If locr would accept GPX files, not have the occasional tagging glitch, and write the GPSVersionID tag properly, it would be pretty awesome. Even with those faults, though, locr is still pretty good, especially at the price.