Exporting Shapefiles To Google Earth I – Quick And Simple


There’s lots of cool and useful geographic data being produced in Google Earth’s native KML file format these days. But there’s also lots of geographic data available online in the standard shapefile format, compatible with most GIS software. Extensions to ArcGIS, like Brian Flood’s Arc2Earth ($99/$299) and Valery Hronusov’s KMLer ($20/$35/$50), can create KML files from ArcGIS data, but these are not only expensive but require that you have ArcGIS 9 or higher installed, a program that lists for $1500. It would be nice if there were cheaper alternatives, and there are.

The first option is free, and quick and simple to use, but has some limitations. GPS TrackMaker can open shapefiles (and MapInfo *.mif/*.mid files as well), and save them in KML format for use in Google Earth. Some of the limitations are:

Still, if you need to create a simple KML file from a shapefile quickly and easily, and for free, GPS TrackMaker does the job. Here’s plot of fault lines in Arizona (in red) from a line shapefile, which took just about a minute to create in GPS TrackMaker and open in Google Earth: 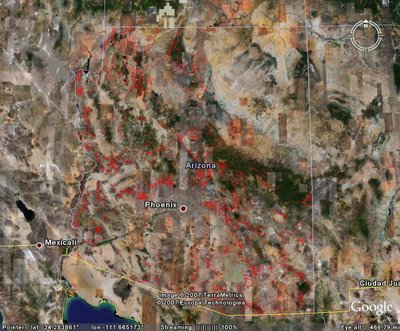 I might mention that the “free” versions of GPS Utility and OziExplorer can import shapefiles, and export them in KML format. But they have similar limitations to GPS TrackMaker. e.g. only one attribute can be exported to KML, and even greater limitations on the number of points that can be imported and exported. Given that, the fact that they’re not really free (both are shareware demos), and the fact that GPS TrackMaker makes it easier to select and change the color of a shape, GPS TrackMaker is probably a better choice.