Now that I’ve written a whole slew of posts about how to download and upload data to and from Google Earth with a GPS, using several pieces of software and multiple steps, I’ve just found one piece of freeware that simplifies the process tremendously. *sigh*

GPS TrackMaker (freeware, Windows only) is a neat little piece of software that can upload and download routes, tracks, and waypoints to most major brands of GPS units through both serial and USB connections. If your unit is one of the very few it can’t handle in a native format, you can connect via the NMEA protocol for real-time tracking (no uploading or downloading, though, and make sure your unit is set to the WGS84 datum). Downloaded data can be edited or deleted, then saved in either GPX or KML format for importation into Google Earth. While it doesn’t support as many formats as GPSBabel, it can also import data in a fair number of formats and convert them to different ones as well.

Similarly, you can open a KML file created with Google Earth in GPS TrackMaker, and then send the data directly to your GPS unit. Unlike EasyGPS, you can’t upload or download both tracks and waypoints simultaneously, but have to upload/download them separately as groups. For uploading tracks, the default (at least for Garmin units) is to put them into the active tracklog; if you want them saved as separate tracks in the track directory, make sure you uncheck the appropriate box in the GPS interface before uploading them to the unit.

One big plus of GPS TrackMaker over EasyGPS is that it can upload polygon data created in Google Earth to a GPS as a track that traces the perimeter of the polygon. Here’s a screenshot of a polygon in Google Earth: 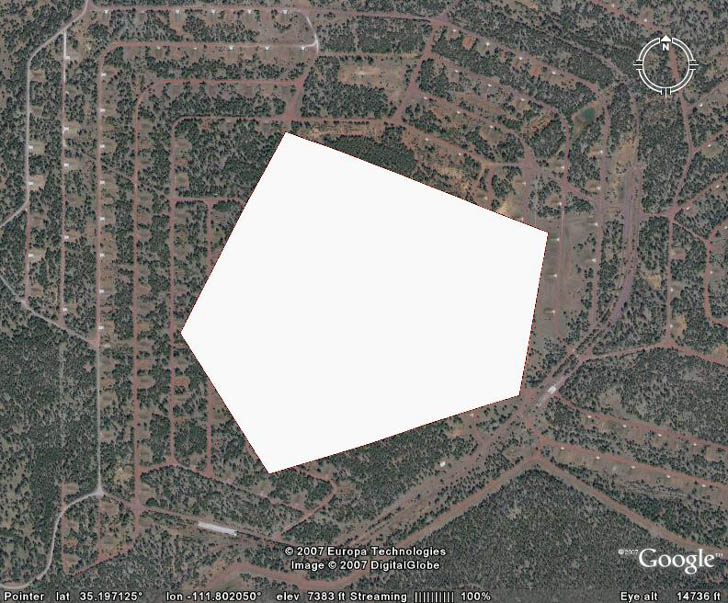 After saving the polygon in a KML file, opening it directly in GPS TrackMaker, then uploading it to my Garmin GPS, this is how the polygon perimeter appears as a track in the screen display:

There’s a lot more to this program: importing and calibrating background maps, drawing tools for creating tracks and waypoints, calculating track lengths, thinning tracks, and so on. In fact, if you’re only interested in using it from importing and exporting GPS data, it may have too many options; you might find EasyGPS’s simpler interface more convenient. But given GPS TrackMaker’s capabilities, and its freeware status, I’d call it a must-have GPS tool for Windows users.

5 Responses to “GPS TrackMaker: A Better Solution For GPS Export/Import With Google Earth”