GPS units are often used to gather data for export to, and use in, GIS. But there may be times when you might want to do the opposite – take GIS data and export it to a GPS. For example, you might have an area shapefile demarcating survey areas, and it could be helpful to import the boundaries of that area into your GPS unit, so that you’ll know when you’re inside (or outside) the survey area. Or you might have a point shapefile with the positions of sampling spots; it would be convenient to be able to import those sampling spot positions into a GPS as waypoints, and then use the waypoint positions to navigate to them. Two of the programs I’ve posted about earlier have the capability to import GIS data in shapefile format into a GPS unit.

There are three kinds of shapefiles: point, line, and area/polygon. But there are only two standard kinds of position data that can be imported by a GPS, points (waypoints) and lines (tracks and routes); areas aren’t a supported data type. But that’s not a problem here, because both of the programs I’ll talk about convert area shapefiles into a line that describes the perimeter of the area, which can be exported to a GPS unit.

GPS Trackmaker – This program has the ability to open point, line and area shapefiles, and upload the data to a GPS. While the program has some support for grid coordinates systems like Transverse Mercator, it’s easier to work with the data if it’s already in the WGS84 geographic coordinate system (lat./long.), the standard for most GPS units. When you open a shapefile, GPS Trackmaker will ask you which of the shapefile data fields (attributes) you want to use to label the shape; this label that will be used to identify the uploaded feature in the GPS.

Here’s an example of a line shapefile, with four independent line segments, drawn in a GIS on top of a topo background: 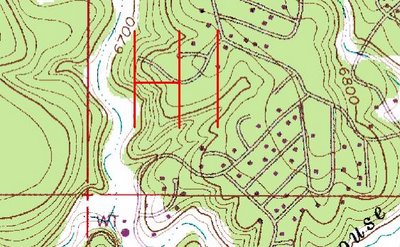 This shapefile was saved in WGS84 geographic coordinates, and then opened in GPS TrackMaker. With the GPS connected and turned on, the Interface menu was used to select the kind of GPS unit (Garmin in this case). The “Send To GPS” button was pressed to enable uploading to the GPS, and “Send Tracklogs as Active Log” was unchecked, so that the line data would be saved in the track directory rather than as the active track:

Clicking on the “Tracklogs” button uploaded the four line segments to the Garmin GPS unit as four separate tracks:

Opening an area shapefile with two polygons in GPS TrackMaker, and following a similar procedure, uploads two separate tracks to the GPS, each one representing the perimeter of an area polygon in the original shapefile:

A point shapefile is imported into the GPS in a similar fashion, but you’d click on the “Waypoints” button to upload those instead of the “Tracklogs” button.

DNRGarmin – This program was introduced earlier for use in exporting GPS data into shapefile format with Garmin GPS units. It can also be used for importing shapefile data into Garmins as well, but there are a few quirks that make it trickier and less convenient to use than GPS TrackMaker:

3. Sometimes, DNRGarmin will handle line shapefiles oddly, connecting lines that were separate in the original file. Here’s an example of this, using the same line shapefile shown above with GPS TrackMaker:

It’s added an additional track from the bottom right of the “H” to the top of the “I” that wasn’t in the original file. Just to confuse things, it doesn’t always do this, but watch out for it.

If you do use DNRGarmin, the process is straightforward:

– Load the shapefile into the program (watch out for the projection!)
– Select the “Waypoint” radio button if you want the individual shapefile vertices to all be imported as waypoints; choose “Track” if you want them imported into the active tracklog. You would probably want to select “Track” for either line or area shapefiles. 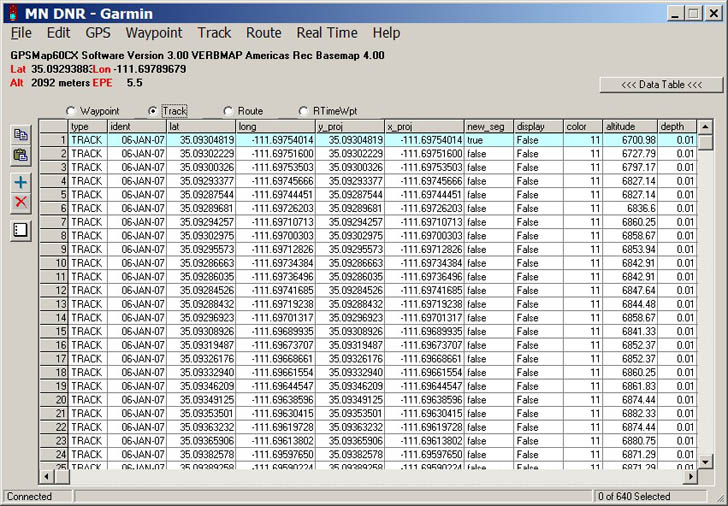 Then select “Upload” from either the Waypoint or Track menu, and the points/tracks will be uploaded to your GPS’s active track log; then save the active track log to the track directory, and assign it a name for identification purposes. Not too complicated, but I prefer using GPS TrackMaker, even though I own a Garmin GPS.

GPS Utility can also import shapefiles, and upload the data to a GPS unit, but as mentioned in an earlier post there are limitations on the software that may render it unsuitable unless you pay the registration fee.

Finally, if you own a mapping Garmin unit, and are a glutton for punishment, you could always convert shapefiles into .img files for uploading as Garmin maps. In some ways this is the best solution, but it’s also the most complicated – perhaps a topic for another day.

6 Responses to “Importing GIS Data Into a GPS Unit”