OA Digital Version Of gvSIG 1.9 Is Out


Back in November, I posted about the release of the gvSIG 1.9, a free multi-platform Java-based GIS program. Oxford Archaeology Digital, which created their own improved installer for the previous 1.1 version of gvSIG, has just released the second beta of a similar improved installer for version 1.9. Differences from the official baseline 1.9 installer include (from the website):

Both Windows and Linux versions are now available; a Mac version is listed as coming soon (the earlier version is still available with a Mac installer). I had no problems installing it on Windows 7, but some people apparently have; the website includes a workaround fix if you run into those issues. Screenshot showing sample data: 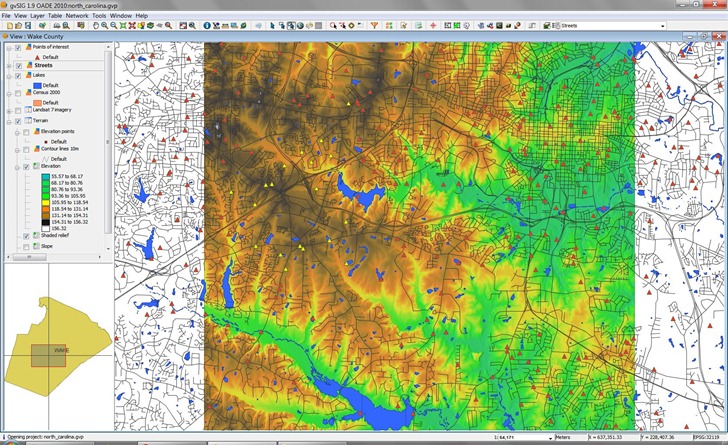 Having played around with it a bit, I have a few initial impressions.

The feature set is one of the strongest of any free GIS program currently available, especially if you choose to install all the optional plug-ins (highly recommended, as is the sample dataset option). Many of these come from the Sextante plug-in, which adds a staggering amount of functionality for vector manipulation/analysis, network/topology, geostatistics, aerial/satellite imagery processing, rasterization, vectorization, georeferencing, hydrology, pattern analysis, etc. – well over 200 new functions. Combine that with the standard gvSIG feature set plus the new version 1.9 features, and few free GIS programs compare. You’d pay thousands of dollars to get much of this functionality in commercial GIS software; for free, downloading and installing this is a no-brainer.

But there are some issues with it. Frankly, it’s a bit slower than other GIS programs in loading, displaying and redrawing data, and this is with my reasonably fast system. Somewhat more annoying is that it isn’t always fully responsive. For example, clicking on layers to select them can take repeated attempts to be successful. Some of the new functionality doesn’t seem to be working yet; for example, several attempts to generate vegetation indices (e.g. NDVI) from the sample dataset using the Sextante functions were unsuccessful – I got a blank image. The same functionality in SAGA (from which many of the Sextante functions were derived) worked fine. Documentation for the Sextante functions isn’t adequate to figure out what I might be doing wrong; for that matter, documentation for the extensive set of new functions in the gvSIG base program are currently only available in Spanish (there’s an English PDF manual for the previous version included in this distribution). So expect to spend some time figuring out how do do things.

These are minor quibbles, though, and I expect that all these teething issues will be fixed before long. In particular, I look forward to English documentation of the new features. Even in its current form, I think I’ll be using gvSIG a lot, and I look forward to seeing how it develops in the future. Many thanks to both the gvSIG developers and OA Digital.

3 Responses to “OA Digital Version Of gvSIG 1.9 Is Out”