For some reason, I have this mental picture of Europe being at about the same latitude range as the US, and I’m often startled when reminded that much of Europe lies well north of the lower 48’s northern border. The Iso-Longitude-Latitude site shows this graphically; put a marker on a point in a Google Maps interface, say near New York City: 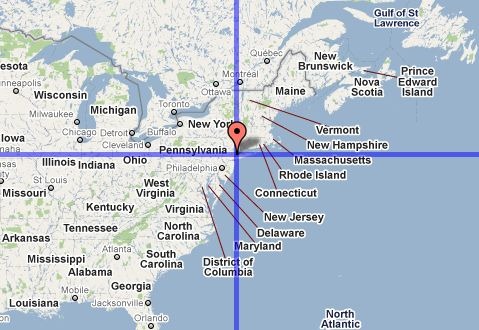 And lines of constant latitude and longitude will be drawn through that point in the first map window, and in a second one directly below it. By scrolling the map eastward, I can see that Madrid is at about the the same latitude as NYC: 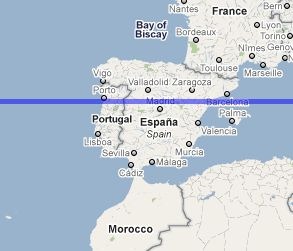 And that most of South America is east of NYC: 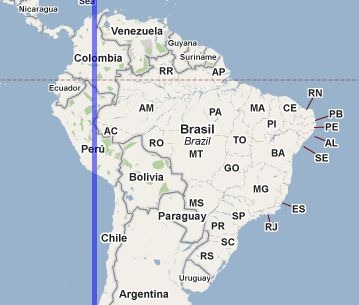 You have the option of showing the “anti-latitude” and “anti-longitude” of a point as well; anti-latitude is the equivalent south latitude of a northern latitude (and vice-versa) e.g. +40 and -40, while anti-longitude is180 degrees opposite longitude, e.g. –75 and +115. “Anti” lines are drawn in red.

You can enter multiple point positions on a map, and their coordinates will show up in a text box; alternately, you can copy and paste coordinates into the text box and display them on the map. Finally, you can save a URL that will save and display all the points you’ve entered.