A little more than a year ago, I posted about the release of Portable GIS 1.0, aka “GIS on a stick”, a suite of portable GIS programs that could be installed on a thumb drive and run from any computer. Jo Cook of Oxford Archaeology has just released version 2.0, which offers more features, including updated versions of software available on version 1.0:

Was surprised to see the last two, as they’re a couple of my own modest utilities:

Program comes with a self-contained installer that lets you select the drive you want to install the package on. This would normally be a thumb drive, but you could also install it on your own root drive or an external hard drive if you like for a quick and easy set of hard-drive-based GIS apps. If installed on a hard drive, I’d recommend deleting the autorun.inf file, as that will change the drive icon to that of the PortableGIS control panel app. You’ll find the latter in the root directory of the drive you installed it on: 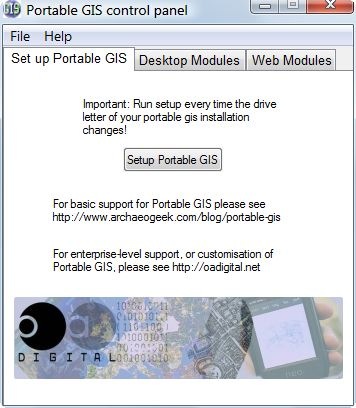 I found configuring the original system variables a bit of a pain with version 1.0, and simply couldn’t get some apps to work correctly; version 2.0 makes it a lot easier by just clicking the Setup Portable GIS button above and following the directions in the command window that pops up. You have to do this every time you run Portable GIS with a different drive letter, which means only once if you install it on a hard drive. The other tabs let you select the desktop apps to run: 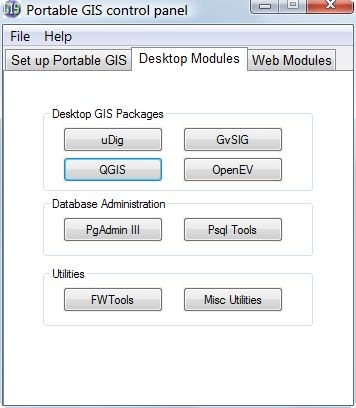 And start and stop server apps required by some of the desktop apps: 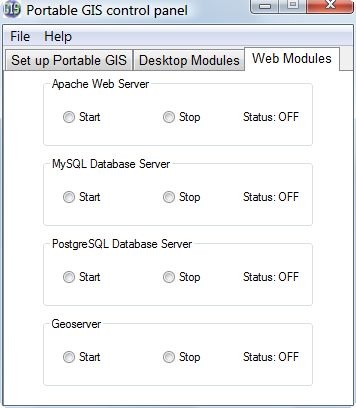 As installed, the Portable GIS suite takes up about 1.2 GB of space, which means it won’t fit on a 1 GB thumb drive by itself as version 1.0 would with a bit of extra effort; but two GB thumb drives are pretty cheap these days.

A final tip: as installed, the Portable GIS menu will come up automatically whenever you plug the thumb drive into a computer that has AutoPlay enabled. If you don’t want this (like me), just delete the autorun.inf file on the thumb drive.

Portable GIS 2.0 is free, and freely distributable; however, if you want a custom enterprise-ready version of this suite, OA Digital offers this as a paid service.