Note: you should read this post first for general info about how to use automated Google Earth caching programs.

The final Google Earth cache automation program I’ll cover, and the only one that still seems to be under active development, is Google Earth Voyager. The original download link at GeoCities disappeared when GeoCities shut down; for now, you can download it from the CNet page; here’s another download site. The program zip file also contains a good user guide in PDF format; unzip all the files into the folder of your choice, and run the program: 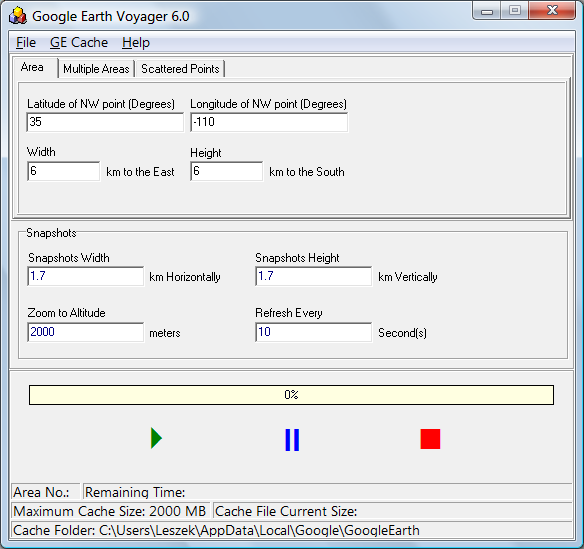 As with GECacheBldr, you enter the NW coordinates of the area you’re interested in, and then the distance east and south of that point you want to create a cache for; I wish you could specify the bounds instead. Then set the width and height of the area covered by the Google Earth view, along with the altitude; note that the width/height is in kilometers, while altitude is in meters. GE Voyager lets you set the update time interval as well, which is useful. Once you’re done, you can open Google Earth and create a network link to the GEVData.kml file located in the same directory as the executable. This KML file comes in the zip file, so unlike the previous two caching programs, you don’t have to start/stop the program to generate the file. Once the network link is ready, clear the current cache if desired, click the green play button, and the caching process will start; you can pause or stop the process at any time. Indicators with the current cache size and time remaining are a nice touch.

Unlike the previous two programs, you can specify multiple areas to be cached at the same time: 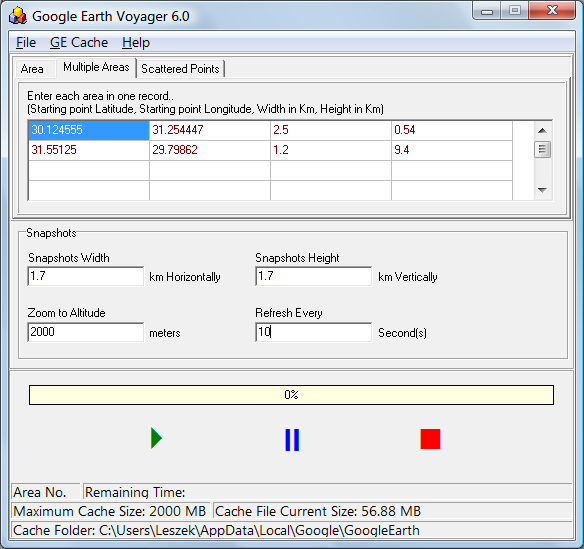 You can also entered scattered points, and have a single area around those points be cached; this, I think, is less useful than the multiple areas: 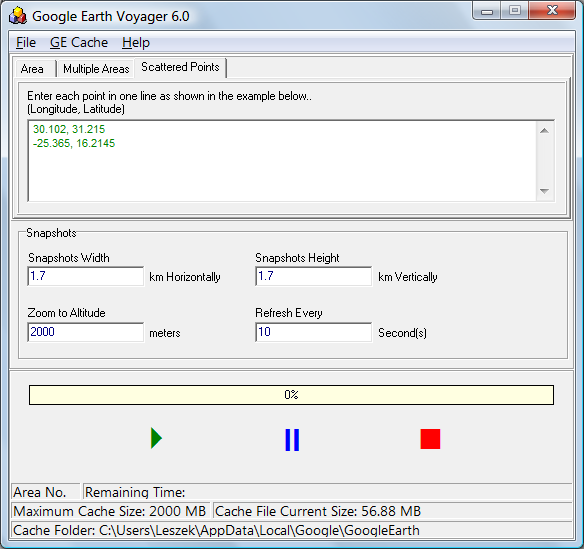 Under the GE Cache menu, you can open the folder containing the cache, which is convenient for making a copy of those files to store away in a different folder, or move to another computer. It also lets you change the cache folder, which I wouldn’t recommend unless you have a really good reason; it requires modifying the registry, and also might have other side effects as well.

GE Voyager is probably the best choice for general use in automatically creating a Google Earth cache for an area. If you could set the absolute area bounds, instead of the NW corner and distances, it would be almost perfect (if you need that capability, GE Cacher is the only choice, but its feature set is inferior to GE Voyager). The ability to do multiple coverages of a single area with different altitudes/resolutions would also be a useful addition.