Note: you should read this post first for general info about how to use automated Google Earth caching programs.

Next Google Earth caching program up for review is GE Cacher.  No install program, just download and unzip the executable into a folder, then run it from there; it will always run on top of other windows. You’re likely to get a security warning from Windows asking if you want to unblock network access for the program. The program has two tabs; first, for configuration: 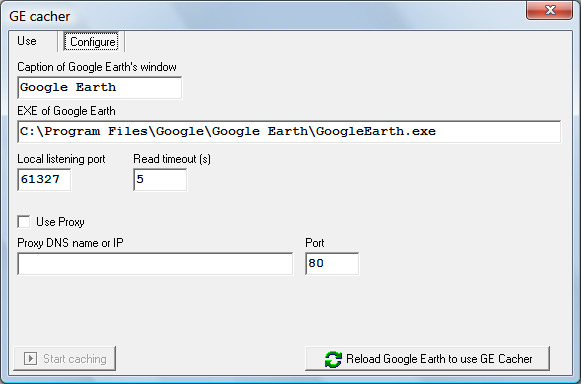 Proxy data is read from the registry, and entered if needed (though it usually isn’t needed for most systems). If you’ve installed Google Earth somewhere other than the default directory, you’ll need to enter its location in the appropriate box. 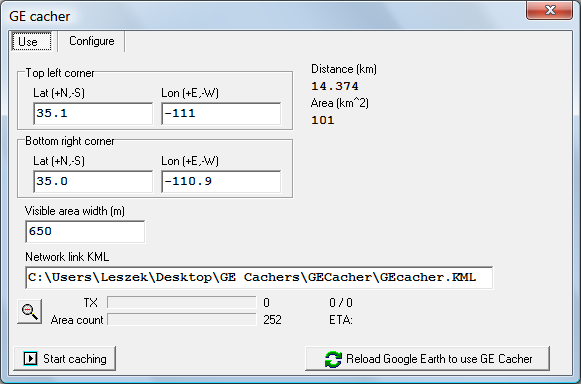 Unlike the two other caching programs I’m reviewing, GE Cacher lets you set the latitude/longitude bounds, which is more convenient, and calculates the area covered. It also saves the entered data in a config file, so it shows up again if you re-start the program. On the downside, though, the time update interval is fixed, and you also have to set the altitude manually in Google Earth. Use this altitude to set the imagery resolution, and also to set the position spacing interval (here called the visible area width). On my system, the “Reload Google Earth to use GE Cacher” button either has no effect, or gives an error message.

You can also specify the location of the KML file to be used as the network link, unlike the other two which have a fixed KML file name and location. You’ll still need to click “Start caching”, then “Stop caching”, to create the KML file, then make a Network Link to it in Google Earth. Once you’re ready, with Google Earth running and the network link created, click on “Start caching” to begin the process. The program will show a bar graph indicator of progress next to “Area count”, and also an approximate estimated time remaining (“ETA”). The program is sometimes cranky in Windows Vista about exiting, which may require bringing up the Windows Task Manager “(Ctrl-Alt-Esc) to shut it down.

I found that the best results were obtained by setting the “Visible area width” lower than you think you’ll need, and also adjusting the Fly-To speed in Google Earth to the fastest setting. The update interval isn’t adjustable, and IMO the program’s fixed update interval is too short to ensure that all the data for an area is downloaded before moving to the next area. But apart from that, the program does do the job, and the ability to set the absolute bounds for the area is a big plus; there’s also decent documentation on the web page. The program doesn’t seem to be in active development any longer; a link is provided to the partial source code in Delphi, but only for educational purposes.