Published by
Leszek Pawlowicz
in Garmin and GPS. 7 Comments

If I now select the folder containing both files for uploading with the Garmin POI Loader program, I’ll see this at the location of a uranium mine in the data file: 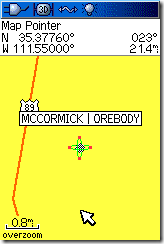 Magenta is transparent, so it doesn’t display. If I uploaded it as a 24-bit graphic file, though:

Colors are changed, and there’s no transparency.

If I now run the Garmin POILoader program, and upload the data from the “Root” directory: