Map projections can be defined as the science (and art) of depicting a curved surface as a flat one. You can’t depict the curved surface of the earth with complete accuracy on a flat surface like a paper map or computer screen, anymore than you can lay a flat sheet of paper on a globe smoothly without folding, wrinkling or tearing it. Transforming that curved surface to a flat representation requires mathematical manipulations of geometric parameters like scale, direction, and area, and that’s what map projections do. The type of map projection that’s right for your application will depend on what you want the map to show, the area it covers, and other factors.

Pictures of map projections are common in geography textbooks, and there’s even several books devoted to them, like Understanding Map Projections

and Flattening the Earth: Two Thousand Years of Map Projections. But there are also a number of online websites and stand-alone applications, that let you display, change and experiment with map projections, and this kind of interactive approach goes a long way towards making map projections understandable. I’ll be posting about a number of these websites and applications over the next week or so.

A Penn State website, based on “An Album of Map Projections by John Snyder and Phillip Voxland (USGS Professional Paper 1453)”, using ArcIMS to deliver up a few basic map projections: 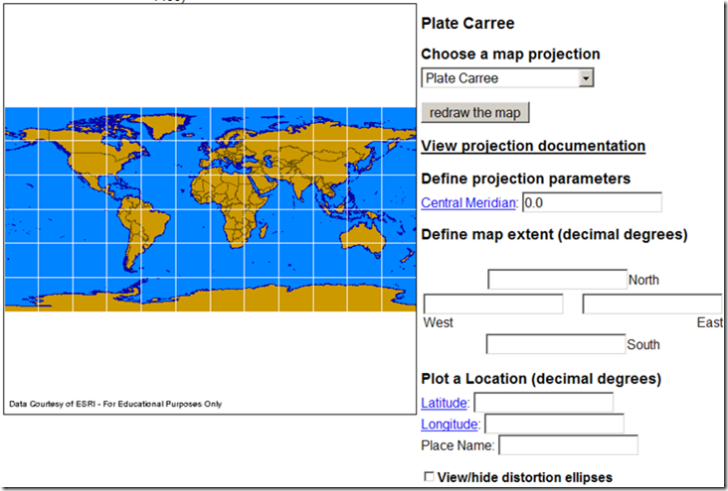 The selection of projections is fairly limited, with only 10 choices. You can set the central meridian and/or map extent, and plot and label a single point. Pet peeve: since when they do call them distortion ellipses?! They’ll always be Tissot’s Indicatrix to me! Tissot’s indicatrix is a circular shape when plotted on a globe; when plotted on a map projection, the circle is typically distorted in some manner that reflects the geometric distortion imposed by the map projection. For example, here’s the Plate Carree projection from above, with Tissot’s indicatrices plotted on top, showing the increasing level of distortion as you move away from the equator: 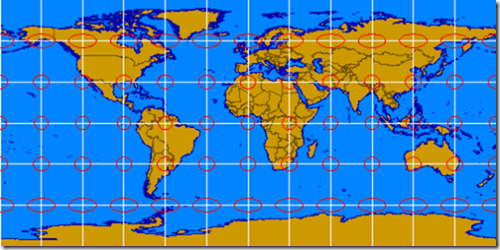 To save an image, right-click on it and choose the “Save Image” option, or do a screen capture. It’s an OK site with a decent presentation, but nothing special in terms of content.

A Java app by Henry Bottomley. 16 different map projections, including some odd ones like the Heart Equal Area:

A choice of graphical map overlays as well, including topographical (as above), the Earth at night, and continental outlines with and without Tissot’s Indicatrix. The image can only be saved with a screen capture, and while you can re-size the image by clicking and dragging on it, this usually winds up distorting the image, which sort of defeats the purpose of getting an accurate map projection image. On the plus side, you can also apply these map projections to images of the Moon, Mars and Jupiter, and there’s a useful text description with links to a number of websites with more info on map projections.