Not long ago, I posted about Another Earth, a site that loads two Google Earth views side-by-side, and lets you either view two locations separately for comparison, or synchronize movements between the two. I said that it was very useful as-is for comparing geographical features, but would be awesome when it added the ability to view historical imagery in one window, and compare it  with current imagery in another. John at Another Earth just emailed me to say that the historical imagery option is now active at the site. You’ll need to make sure that the time sliders are enabled for one or both Google Earth windows in the Control Panel (layout is slightly modified from the previous version): 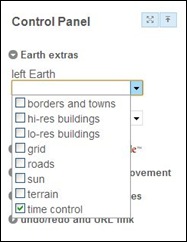 Then move the time sliders to an available imagery date; tick marks in the slider panel mark dates with available imagery. In the sample below, I compare a wooded knoll on the left from 12/2003 with a later view in 5/2005, after the owner had illegally chainsawed through the tree trunks to kill them, and clear out the lot:

Here’s another comparison near Bandon, Oregon, showing growth of cranberry bogs  between 1994 and 2010:

You’re restricted to whatever imagery Google Earth has available for that area for a particular time, which for much of the US doesn’t seem to go earlier than the 1990s. Still, this is pretty awesome as-is for looking at man-made landscape changes or the effects of natural disasters, and will only get better with time as Google adds more historical imagery to their database.