One Final Look At GPS Positional Accuracy With SA Watch


In previous posts (one, two), I’ve compared GPS positional accuracy for a Garmin 60Cx handheld GPS unit and a Holux M-1000 Bluetooth unit and seem to have found that:

– The Garmin’s average position seem to be better, but the distribution in measured positions is large

– The Holux’s positions have a much tighter distribution, but the average is further off from the true position than the Garmin

Just for the heck of it, I took a look at results from both receivers with one more program that’s been around a while: SA Watch (shareware, $20; 30-day demo evaluation version available). SA stands for Selective Availability, the pre-2000 government policy of degrading GPS signal accuracy to non-military GPS receivers. The idea was that you could run SA Watch for a prolonged period of time, hours if not days, and the effects of SA would get cancelled out leaving you with a reasonably accurate position. SA is now turned off, but SA can still be used to evaluate the stability of a GPS-measured position, and calculate an average. While VisualGPS gives you an arithmetic and least-squares mean, SA Watch lets you calculate a mean weighted by the Dilution Of Precision, a measure of the amount of error in the position that’s due to GPS satellite geometry.

Here’s a plot of 119 positions measured by the Holux M-1000 GPS unit; the position grouping is pretty tight: 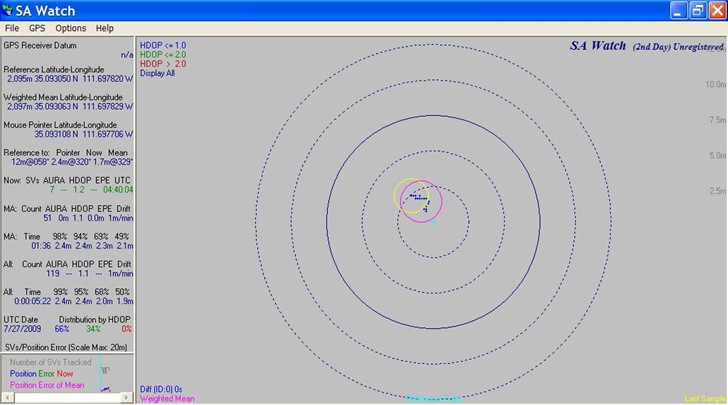 And a plot of  412 positions measured over the same time period by the Garmin: 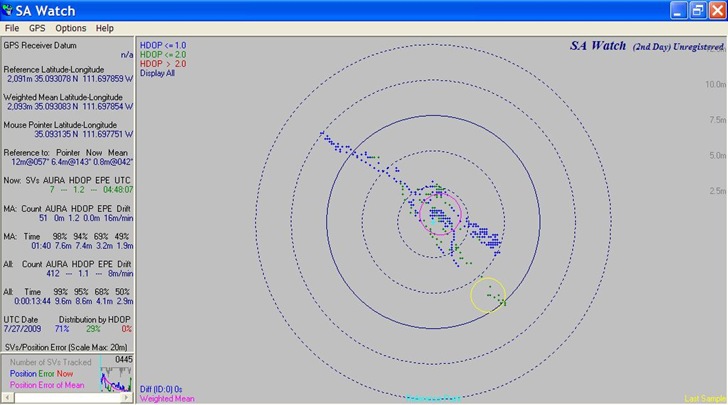 As with previous measurements, the distribution of Garmin positions is far larger than that of the Holux. Based on all this, I’d have to say that a single position from the Holux is likely to be more accurate than a single measurement from a Garmin, even if the Garmin’s average value is better. And for my applications, that’s what really matters; you may have a different requirement. If I get the time, I may do a similar analysis in the future from a different location, and see if the results are comparable.