In a previous post, I used the program VisualGPS to compare the positional accuracy of a Garmin 60Cx GPS receiver with a Holux M-1000 Bluetooth receiver, measured at a National Geodetic Survey marker of known position. The average position of the Garmin wound up being closer than that of the Holux, but the distribution of positions for the Garmin was far wider than that of the Holux. To compare the GPS receiver results another way, I measured positions from both units over the same period of time, then determined the Circular Error Or Probability (CEP) for both.

– If you have a Garmin GPS unit with either USB or Garmin Serial output, you can record the real-time position directly with a set time increment.

– You can also monitor an NMEA-capable GPS signal, but the time increment appears to be fixed at 5 seconds

– You can set a GPS unit to log a track at a set time increment, and log that track at a single point. Export the data to a GPX file, and DNRGarmin can read it in.

– DNRGarmin can also read in point data in shapefile, DBF and CSV format.

Once the data is in the program, choose Edit => Calculate CEP from the menu: 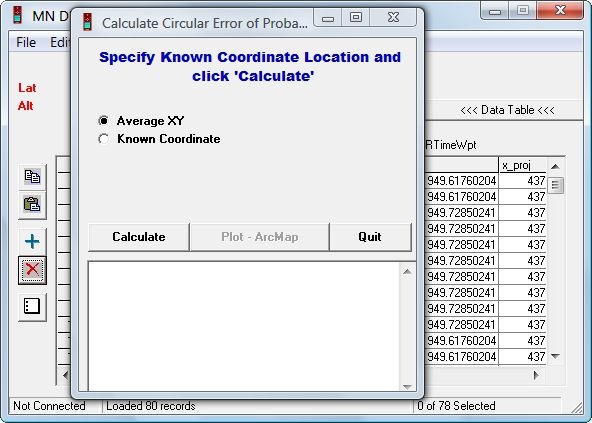 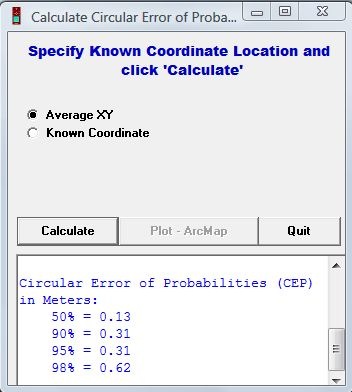 DNRGarmin also gives you the average position, and standard deviations, for the data you’ve used. If you have ArcMap installed on your computer, you can export the data into the program and display it graphically; see this report for an example of those plots. I don’t have ArcMap on this computer, so I’ve just tabulated the results below. Here’s the first run:

The numbers are distances in meters from either the mean position, or the known benchmark position. Looking at the mean position, the Garmin has a far larger distribution of positions than the Holux. For the known position, the 50% CEP is lower for the Garmin, but the other three CEPs are substantially lower than those for the Holux, even though it shows a systematic skew from the true position. If the given benchmark position was off by a bit, and actually closer to the Holux’s average position, that might explain these results, but that’s just speculation.

Another set of measurements, with similar results:

Finally, comparing the mean position from both runs to the known position, and to each other:

The mean position from Garmin measurements is closer to the known position than the Holux for both runs, and the differential between the two runs is also smaller.

Not quite sure what to make of this; the tighter distribution of the Holux data is a point in its favor, especially if you’re only averaging positions over a short period of time. But for longer periods, the Garmin mean is closer to the true value. I’m kind of wishing that the benchmark position is incorrect, since that would tip the balance towards the Holux, but I doubt that’s the case. I’ve got one more program that can look at GPS position as a function of time, and calculate averages; that’s the next post.

And yes, there actually is a reason I’m wasting so much time looking at the accuracy of GPS units; that will become clear in a future series of posts under preparation.