Part I covered a number of ways to improve the accuracy of GPS position measurements using a standard consumer-grade unit. Here are a few more ways to improve your chances of getting an accurate position determination.

8. If your unit supports it, turn on WAAS

Getting an accurate GPS position depends strongly on your GPS receiver having the exact time, the exact position of the GPS satellites in their orbit, and the exact distance from each satellite to where you are. Errors can occur with each of these factors:

Time: Your GPS gets its clock synchronized to the exact time by using the broadcast time signals from the GPS satellites, each of which has an extremely-accurate atomic clock on board. But even these atomic clocks drift off of true time, and while they’re re-set to the right time on a regular basis, they can still be off by a bit when you’re doing your measurements.

Position: The GPS satellites also broadcast their current position in orbit around the Earth, for your GPS receiver to use in calculating your position. But their actual orbits can also be off a bit from where they “think” they are, causing additional errors.

Distance: The distance from you to a GPS satellite is calculated by measuring the time it takes a radio signal to travel from the satellite to your GPS receiver; combine that time with a known speed for the signal (the speed of light), and you can calculate the distance = time x speed. But the speed of those signals can depend on conditions in the Earth’s atmosphere, most importantly the ionosphere. Those conditions vary both by time and by location, causing unpredictable fluctuations in the signal speed, in turn creating errors in the distance calculation. Here’s a link to a real-time map of ionospheric conditions across the globe, and here’s a larger real-time map for the US alone.

To reduce the size of the error introduced by these factors, and allow GPS to be used for general aviation purposes, the FAA developed the Wide Area Augmentation Service, or WAAS for short (a similar system for Europe is known as EGNOS). Two satellites in geosynchronous orbit around the Earth broadcast real-time corrections for both satellite orbital positions and clock times. There are also about 25 ground stations scattered across the US that monitor errors in their measured position due to ionospheric effects; approximate corrections for these effects are calculated and broadcast via WAAS to correct for those effects. Using these WAAS corrections can reduce the overall uncertainty in GPS position by a factor of 3 to 5 by some estimates. Turning on WAAS may be the single biggest thing you can do to improve your GPS position accuracy.

Most handheld GPS units, even the cheapest ones, have WAAS capability. But many of them have WAAS turned off by default, since it decreases battery life slightly. A friend bought a specific GPS unit four years ago because it had WAAS capability, but only found out recently that it was turned off by default; turning it on improved his position measurements a lot. Read your owner’s manual to find out whether your unit has WAAS, whether it’s turned on or off, and how to tell if your unit is using WAAS to improve the position accuracy. For example, on the Garmin 60-series units, a small “D” will appear at the bottom of every satellite signal bar if WAAS is enabled and working.

There are two WAAS satellites covering the US, including Hawaii and most of Alaska. Here’s a map of the WAAS satellite coverage areas (the satellite’s position is roughly in the middle of each of the outlined areas): 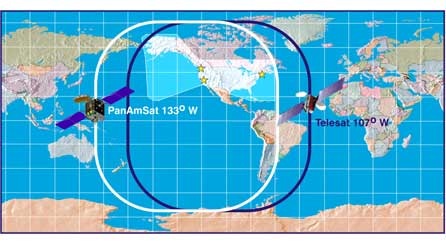 The FAA has a web page showing in real-time the WAAS coverage status: 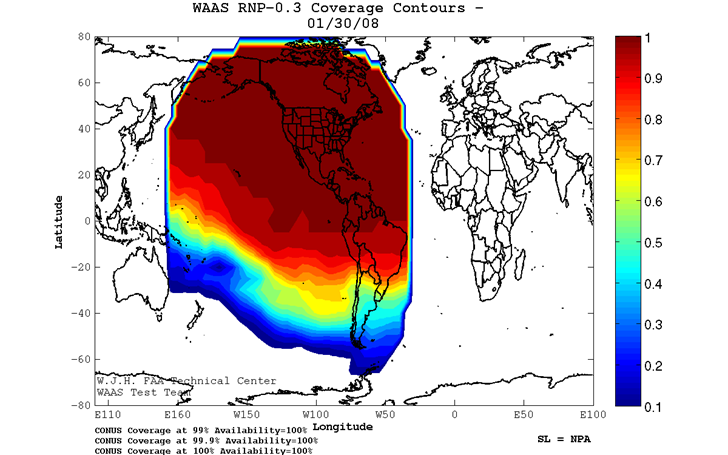 9. Measure positions at night, or early in the morning

The WAAS system uses data from about two dozen ground stations to calculate the effect of ionospheric effects on GPS accuracy. If you do your measurements near a ground station, they should be reasonably free of error from those effects, but if you’re located between ground stations, then it’s more likely that the ground station corrections will be less valid for you. There may be variability in ionospheric effects between stations that can affect the accuracy of your GPS measurement, but which the ground stations won’t see. To minimize this possibility, you want to do your measurements during times when there’s the least amount of variability in the ionosphere across a wide area. The best times for this are at night, with early morning a reasonable alternative. But the later in the day, the more likely it is for the ionosphere to become less uniform. Here’s an image of the ionosphere across the globe at around 12 AM EST:

The entire Western Hemisphere is in darkness, and dawn is breaking over the Middle East – conditions are reasonably uniform over those areas. But on the daylight side, there’s a lot more variability in ionospheric conditions; if those were present over the US/Europe, they could introduce errors in the WAAS/EGNOS corrections for a location between base stations. The variability is likely even worse than the plot above shows, since the values are determined from ground station readings (the black dots on the plot), and the distribution of those is uneven across the globe. During periods of heavy solar activity, these effects can become more pronounced. While we’re currently in a quiet solar phase, that activity will likely pick up over the next few years, potentially increasing the possibility of GPS position errors.

Variations in the water content in the lower levels of the Earth’s atmosphere (the troposphere) due to weather or humidity can also affect the speed of the GPS radio signal, and introduce error. There’s no simple way to correct for this, so if you want to minimize this error source, do your measurements under clear skies.

You’ll get a more accurate position if the GPS satellites are spaced widely across the sky than if they’re bunched up more closely. This satellite geometry effect on position accuracy is characterized by a factor called Dilution Of Precision, or DOP; the lower the DOP, the more accurate your position measurement is likely to be. I’ve posted before about free software that calculates and plots DOP over the course of a day; by doing your measurements when DOP is low, you’ll improve their accuracy.

There are other, random, short-term processes that can add uncertainty to a position measurement: system noise and accuracy, short-term fluctuations in GPS signal strength (scintillations), etc.. Most GPS units these days let you average a single position over a period of time to let these random variations cancel each other out, improving the accuracy of the measured position. Check your owner’s manual to see if your unit supports this function.

There’s an apocryphal story about a surveyor who consistently got less accurate readings with a specific GPS than any of his co-workers got with the same unit. Supposedly, the problem was traced back to multi-path interference that resulted from the GPS signal bouncing off his bald head to the unit, and was solved by having him wear a hat when he used a GPS. I find this story highly dubious, but if you’re serious about minimizing error, keep it in mind.

14. Use the GPS unit to store position data as waypoints/tracks, and download the data directly from the GPS to your computer.

If you write a position down on a piece of paper, there is a small but real possibility that you’ll copy them down incorrectly; saving the position data on your GPS eliminates the possibility of these kind of errors. Similarly, copying data from your handwritten notes, or manually reading data off the GPS and typing it into your computer, introduces another step where errors can creep in; downloading the data directly from your GPS to your computer means that these kind of transcription errors are no longer possible. Finally, many GPS units display lat/long position data to 5 decimal places, but store it internally (and send it to your computer) with as many as 8 decimal places. No, your GPS can’t measure a position that accurately, but rounding up or down to the fifth decimal place might add about a half-foot of uncertainty to the position, so why not keep that extra information.

Of course, GPS units can break , or get lost in the field, so writing down positions as a backup for your data isn’t the worst idea in the world.