Published by
Leszek Pawlowicz
in GIS and shapefile. 6 Comments


The Mapperz blog has a new post on ArcGIS 9.2’s Simplify Polygon feature:

“Simplifies a polygon by removing small fluctuations or extraneous bends from its boundary while preserving its essential shape.”

A nice tool to have to simplify polygon shapefiles with too high a level of detail. But suppose you don’t have ArcGIS 9.2 (at around $1500 list)? There’s a free web-based shapefile utility that does something similar.

MapShaper is a Flash-based utility that will take your line or polygon shapefile (16MB maximum), and let you:

Here’s a screenshot showing a subsection of the sample world data set that you can load to try out the program, part of the Gulf of Mexico/Caribbean Sea area: 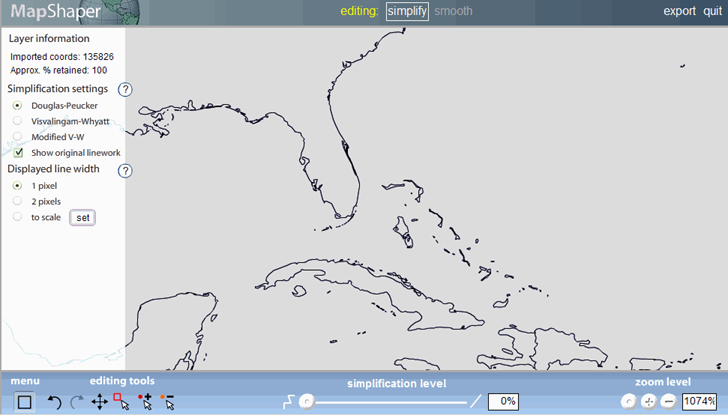 As a bonus, the number of vertex coordinates is reduced to 13% of the original, making it smaller and faster-loading. Once you’re done, you can export the simplified data as a shapefile, or as an Encapsulated PostScript (EPS) file for printing. Because it’s done in Flash, MapShaper should run on any OS with a browser that supports Flash.