I love rocks. I love dirt. And I love the maps that show them. A good geology map is visually like a weird hybrid between a Peter Max poster and Jackson Pollock drip painting, but also tells a story spanning several billion years of Earth’s history. I’ve found a few websites where you can find and download geology maps in a variety of formats.

The National Geologic Map Database, run by the United States Geological Survey, catalogues maps and geologic names, and also describes what mapping is currently underway. Clicking on the “Geoscience Map Catalog” is a portal to info sections describing over 75,000 maps of United States geology from over 350 sources. Many of these info sections only give general metadata about the maps and where you can obtain them, but many others offer links to either the maps themselves in PDF or online MRSID format, or the actual GIS data information itself.You can search by Place Name, pull up statewide maps from a graphic interface, or search by general criteria. There used to be a graphic interface showing which detailed maps were available for different areas of the country, which was very handy; unfortunately, they’ve removed that graphic interface, with a general comment to the effect that “we’re working on a new one”. Still, after you select a place name, you’re given a wide variety of options to narrow down your search by:

Here’s a screenshot of an online geology map accessed through this website, just south of Barstow, California:

For geology mapping of the US and the rest of the world, try the Interactive Mapping Tool at Cornell’s Geoscience Information System pages. You won’t get the same kind of detailed maps as you can at the USGS site, and the mapping interface is a little clunky, but it does offer data for the rest of the world, and you have the option of downloading the amps you create in JPEG or PostScript format.

And when rocks die, they become dirt. The US Department of Agriculture’s Soil Data Mart offers downloads of soil data for the entire United States. Mapping at the small-scale state level is complete (STATSGO), while larger-scale mapping with greater detail is in the process of being completed (SSURGO). Map data can be downloaded in GIS format, or created in a browser using the Web Soil Survey site, though the latter limits you to areas less than 10,000 acres in size and isn’t very convenient to use. The USDA also offers a free Soil Data Viewer which can be used as an extension to ArcMap to link soil GIS data to tabular soil data and create soil-based thematic maps, but which can also be used as a stand-alone in conjunction with Microsoft Access to extract tabular data.

For the rest of the world, the European Digital Archive On Soil Maps Of The World has a large selection of digitized paper soil maps covering virtually every country, most of which can be downloaded in JPEG format. Here’s a sample map of the soils of India (a higher-resolution version can be downloaded from the website): 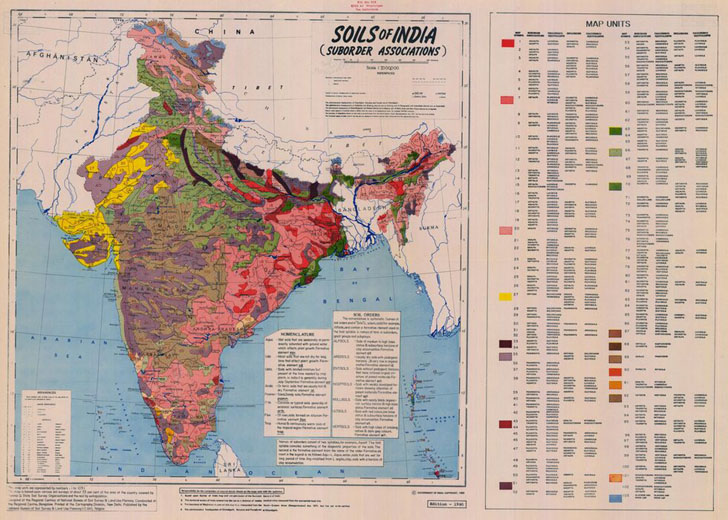