Archive for the 'data' Category Page 2 of 19

Yeah, that’s not news to a lot of you, but it is to me. My last significant exposure to ESRI’s ArcGIS Explorer digital globe software (Windows only) was back when it came out, quite a few years ago. I tried it, and found it inferior to Google Earth in performance in 3D, and too complicated to bother learning it; since then, I’ve stuck strictly with Google Earth. A recent post on the free Garmin Tool application, which creates Garmin Custom Map overlays using ArcGIS Explorer, forced me to look at it again, and I was surprised to discover that it’s turned into a pretty cool, and pretty useful tool. Not perfect – the 3D performance is still pretty weak compared to Google Earth, and the out-of-the-box configuration isn’t as strong. But it has it’s own very strong set of features, and when used in 2D mode, is a good addition to any geography toolbox. Nice re-organization of tools/features in a MS-Word-like ribbon format, much better than the original interface. 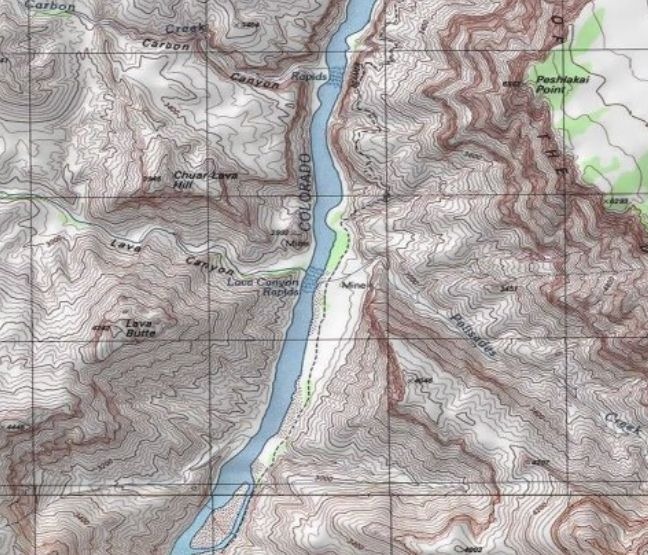 No vector basemap data, like the roads you’ll find in Google Earth.

Oh the “needs work” side:

If It Were My Home: Country Comparison Tool

Published by
Leszek Pawlowicz
in data and demographics. Closed

If It Were My Home plots the area of any world country of your choice on a Google Maps view centered around your current location (presumably determined by your IP address): 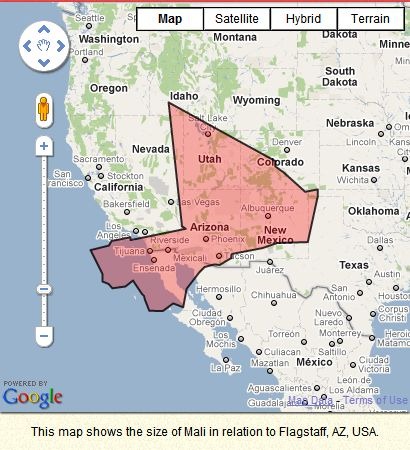 And gives a comparison of basic demographic characteristics between your country and the one you’ve chosen: 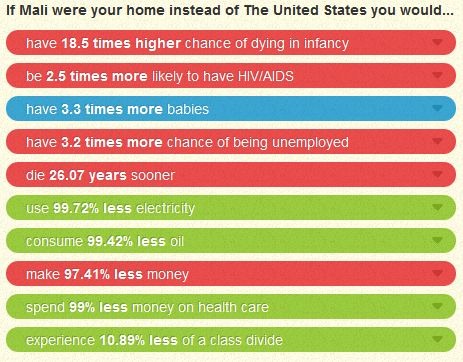 Clicking on any demographic parameter brings up a dropdown with more info: 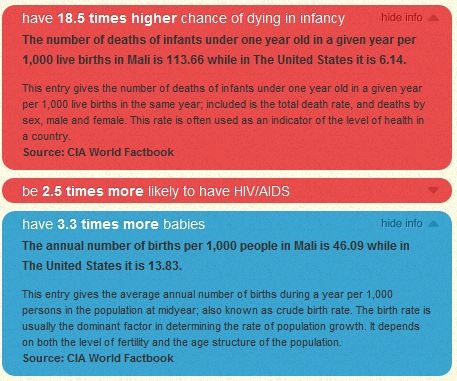 There’s also a (usually too brief) summary of the country’s history, Amazon links to books, links to social network sites like Facebook for sharing, and a comments section. Oh, and usually some really incongruous ads.

Mapping America: A Census Data Explorer From The NY Times

Mapping America: Every City, Every Block, at the New York Times website, takes several limited subsets of US Census data and plots them across the whole country for every census tract (which is at the neighborhood scale for much of the US). 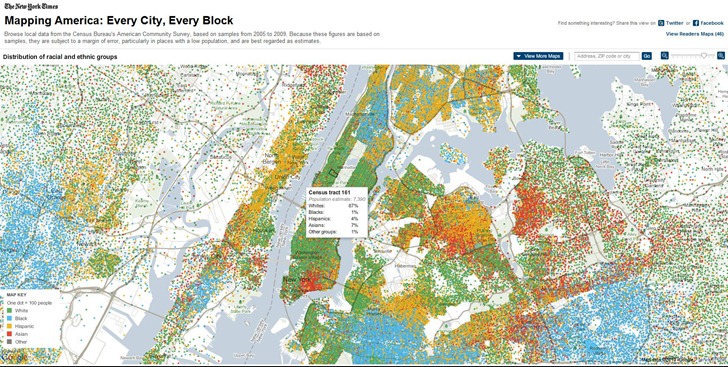 Pass the mouse cursor over the map, and data for every tract shows up in a pop-up window: 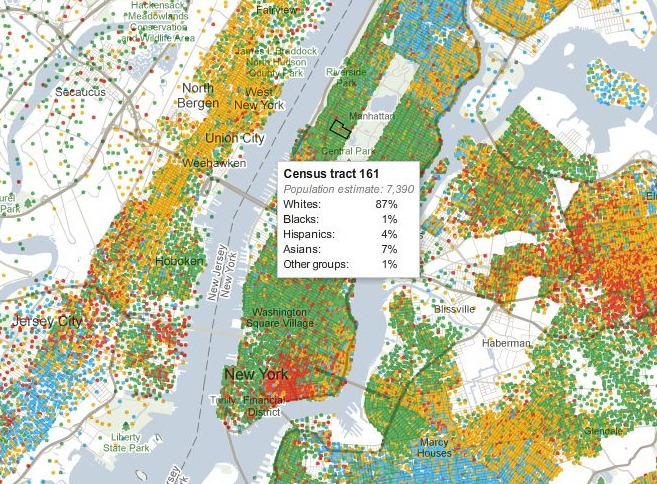 You can choose a limited number of map variants from the following categories:

If you come up with a map that looks interesting, you can share it on Facebook or Twitter. No way to export map data, or map graphics (except with a screen capture).

GeoSolutions, an open-source consulting company, has created a free GeoServer workshop disc in iso format. You can run this iso in a free virtual machine environment like VirtualBox, or burn it on a DVD to use as a bootable Ubuntu Linux OS disc, or to install it on a computer. The disc contains:

OpenGeo, another consulting company, has also recently released the latest version of the Community Edition of their OpenGeo Suite. This is the free unsupported version, and includes not only GeoServer, but some additional tools: GeoWebCache, a web map caching app, and GeoExt, a “JavaScript library that provides a groundwork for creating rich web mapping applications”.

Published by
Leszek Pawlowicz
in cartography, data and DEM. Closed

The WeoGeo blog highlights the Shaded Relief Archive, a collection of hand-shaded relief maps freely usable and distributable. This is a joint effort from Tom Patterson, creator/manager of the Natural Earth Data website (see this post for more info on the latter site), and Bernhard Jenny (author of the Terrain Bender and Scree Painter tools). While you can generate shaded relief from digital data (using reflectance), hand-shading can often do a better job of highlighting subtleties of terrain detail, as in this comparison of hand-shaded data (left) and digitally-derived data (right) taken from the Shaded Relief Archive comparison page:

Some maps come in georeferenced GeoTiff format (along with shapefiles that define map area and coastlines); others have yet to be georeferenced. Most are at fairly small scales, so they’ll be best for maps covering large areas; an exception is the set of 100+ shaded relief maps for US National Parks.

Note: Some of these shaded relief maps, as well as many others, are also available at the WeoGeo Market site.

Nuke A City With The Ground Zero Mapplet

Bit of a grim app, but the CarlosLabs Ground Zero Mapplet will show the effects of various-sized nuclear weapons on a number of preset world cities. Here’s the impact on Pittsburgh of the “Tsar Bomba” blast, the most powerful nuclear weapon ever tested at 50 megatons: 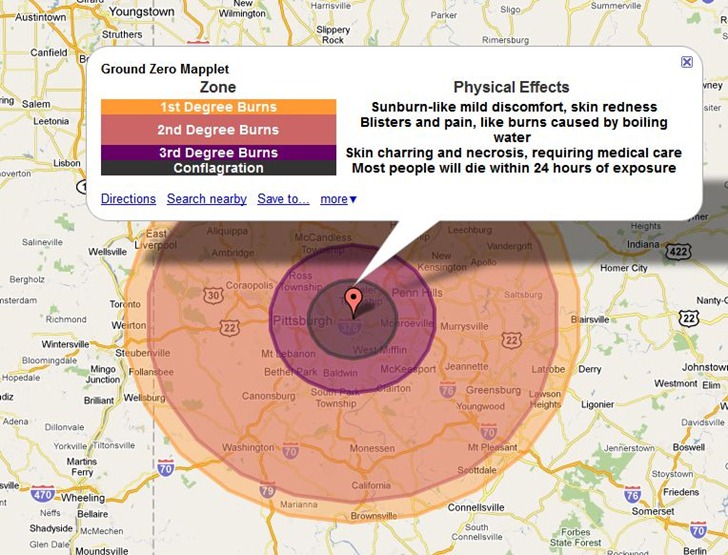 Most other blast options are for much less, like the 15 kiloton “Little Boy” dropped on Hiroshima: 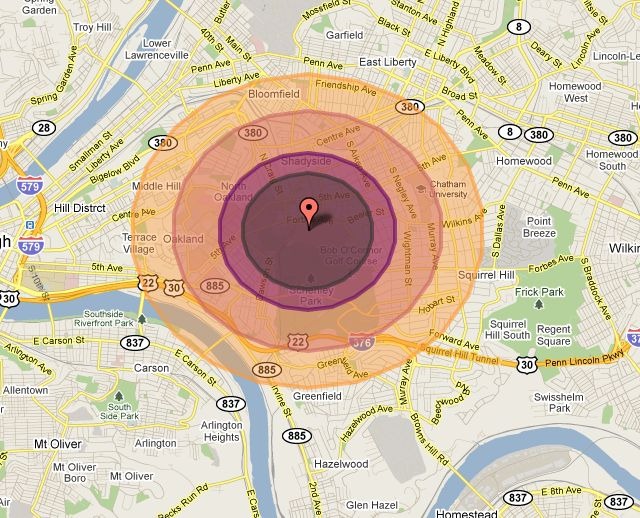 But the largest explosion model available is an asteroid impact comparable to the Chixculub impact 65 million years ago that caused dinosaurs to go extinct: 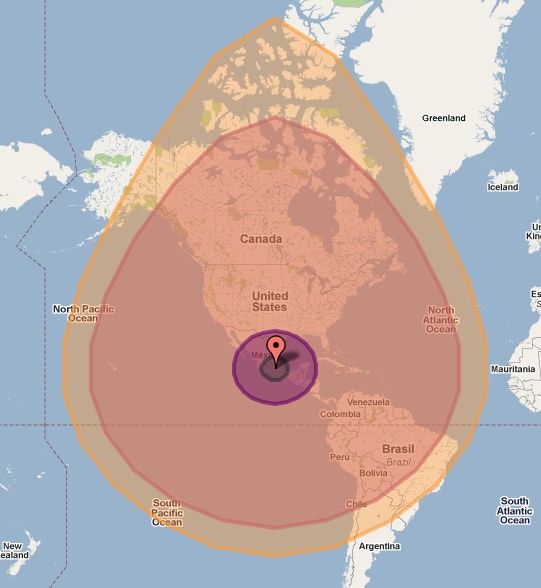 The main version is a Google Maps Mapplet, so you’ll need a Google account to use it in your My Maps collection. There’s a direct link to install it into My Map at the CarlosLab website. The Maps API link will take you to a page with embeddable code that lets you put a comparable app into your web page, like the live example below:

Unlike the Mapplet, the embedded app lets you select any location, but the overall map size is constrained. Source code for this app is available at the link above.

The Australian government’s GeoScience Australia website offers downloads of a wide variety of map and GIS data. There’s a web interface called MapConnect that you can try for selecting topographic and geology data for download and creating custom PDF maps: 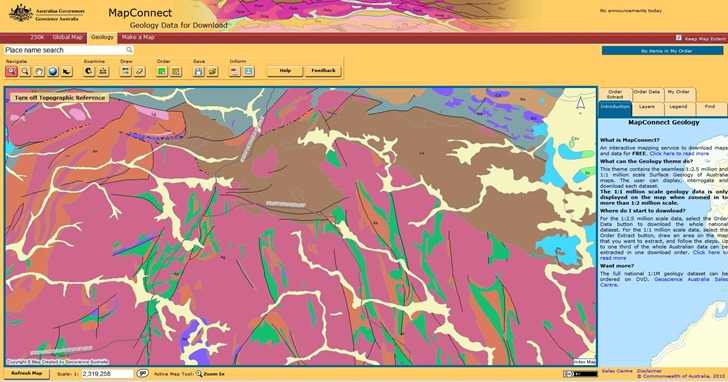 But I found it a bit confusing to navigate and use. You might do better to go to some of the other pages that let you browse and/or search for data, even though finding data this way may take a while.

Lots more to find, if you poke around the site for a while.

Published by
Leszek Pawlowicz
in data and DEM. 1 Comment

The OpenTopography Portal is a GEON Project initiative to build an online system that provides integrated access to high-resolution topographic data, web-based processing tools, and enables the user community to share knowledge, experiences and resources 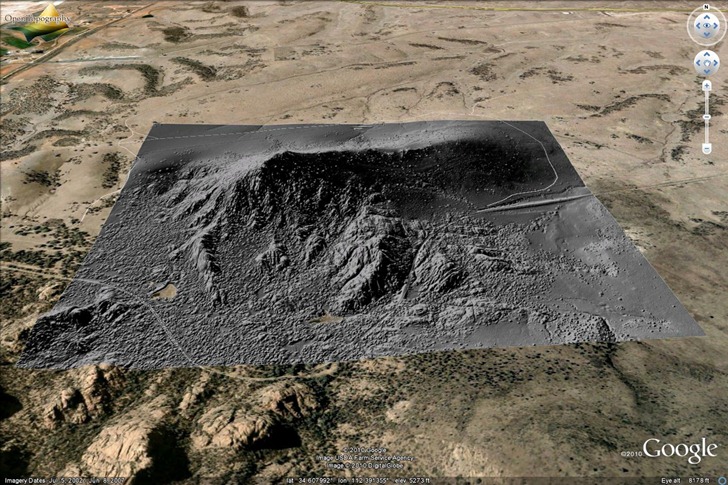 Data resolution is typically at least one meter, and sometimes better than that. Biggest problem with the site now is sparse area coverage; they’re relying on voluntary donations of data, and so far, the overwhelming majority of data is earthquake fault zones in California: 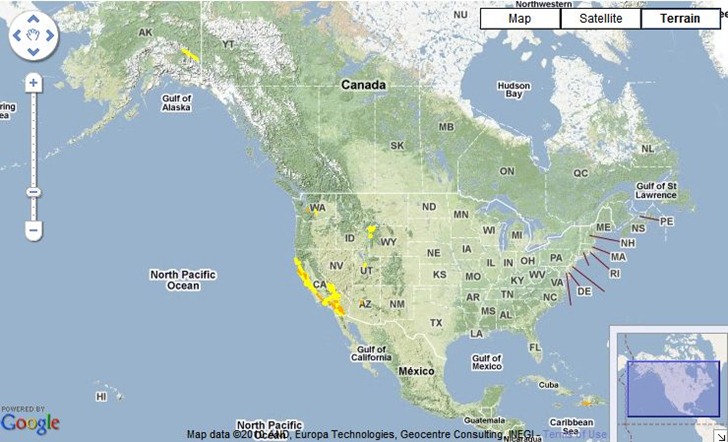 There’s a smattering of additional data for Alaska, Washington, Wyoming, Utah, Arizona and Haiti, but only a small fraction of the US is currently covered. The site/project is still active, so hopefully additional areas will be added in the near future. At the very least, it’s a useful site for getting sample LIDAR data to play around with.