Published by
Leszek Pawlowicz
in Google Earth and GPS. 6 Comments


A few months ago, Google discontinued Google Earth Plus, their $20/year augmented version of Google Earth. At the time, they said they would add one of Plus’s key features, support for direct connection of a GPS receiver, to the free version in the near future. With this week’s release of Google Earth 5.0, lots of attention has been paid to its big new features (ocean coverage, historic imagery, tour recording); see Ogle Earth and the Google Earth blog for more info on those. But I’ve only seen one or two mentions that this latest version adds GPS support. 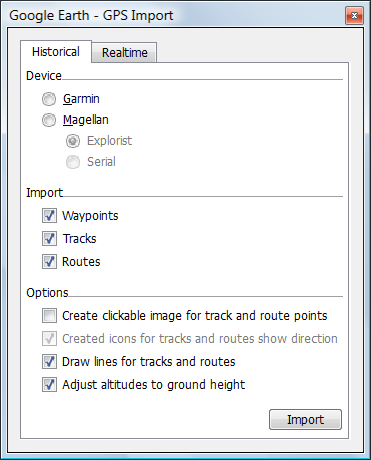 The Historical tab lets you import waypoints, tracks and routes from either a Garmin or Magellan GPS (the only brands currently supported). Garmin support should include the serial as well as USB interfaces, but I don’t have a serial connection to test that. Checking the “Create clickable image …” link assigns icons to the track/route points with pop-up data for them; checking the box below that creates icons to show the direction of movement.

The Realtime tab shows the options for live tracking of your position in Google Earth: 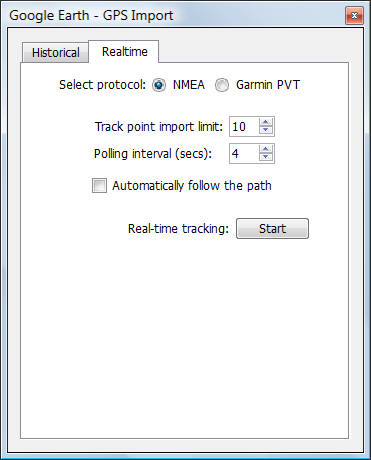 Currently, it supports only the Garmin protocol and NMEA (serial connection, either through a serial port or Bluetooth); I’ve tried both, and it does a good job of finding the correct port. Polling interval determines how often GE gets position data from your GPS, while “Track point import limit” determines how many position points are imported and averaged for every polling. More points means a slower position update, but a more accurate one; less points updates your position more quickly, but potentially at the cost of accuracy. If you have a high-quality GPS receiver, with strong satellite reception, accuracy is unlikely to be a serious issue, and you can probably set the track point import limit to a low number.

Checking the “Automatically follow the path” box will make Google Earth automatically zoom to the current GPS location, and follow it as it changes. The only view you have with this option is from overhead; if you change to an oblique view, it will automatically move the view back to overhead. The option is ghosted out as soon as you start tracking, so if you don’t check the box, the only way to immediately zoom to the current GPS position is to go into “Temporary Places”, find the Position marker in the RealTime GPS folder, and double-click on it:

If you move, it also saves your path and displays it onscreen; to save it permanently when you’re done, you’ll have to right-click on the “Path” listing and save it as a KML file. I believe the Position icon is supposed to show up in the Google Earth display to show your current position, but for static positions it disappears almost immediately.

For simplicity and convenience, Google Earth’s built-in GPS interface is hard to beat. But for real-time tracking, the feature set is pretty weak; the limited GPS receiver support, the inability to view from an oblique angle with live tracking, and problems with icon display (and lack of choice for the icon) are serious drawbacks. The data import feature also isn’t that great; you’d be better off using a program like EasyGPS or GPSTrackmaker to import data from your GPS, and then save it either in GPX format (which Google Earth can open), or directly in KML format. The free version of GPS Trackmaker comes with a real-time GPS position interface which supports more units than Google Earth, and which can plot your rea-time position in Google Earth. There are other options for GPS real-time tracking and data import into Google Earth as well; do a search on this blog for “Google Earth” and “GPS”.