Published by
Leszek Pawlowicz
in GIS and GPS. 1 Comment


Got an email question about how to create point grids in GIS format with free software, and the off-the-top-of-my-head solution was fGIS. fGIS (Forestry GIS) is a decent freeware GIS developed by the Wisconsin Department of Natural Resources using the TatukGIS Developer Kernel. Up until late 2005, updated versions were being released regularly as freeware, but a change in the Kernel licensing conditions made that impossible for future versions. The last free version is still available, but is not guaranteed to be bug-free and will never be fixed or updated. Still, it has some useful utilities, including the “Generate Cruise Points” tool, available from the Utilities menu; this tool lets you create random and regularly-spaced point shapefiles for a defined area.

Start up fGIS,  and you’ll be asked to define a project name right away. The coordinate system will be defined by the first layer you add, either raster or vector, and whatever data layers you add to the program must be in the same coordinate system. The program supports many different formats, vector and raster, including shapefile and GeoTiff. You’ll need to have the area you want gridded defined by a vector layer, either one you open or one you create using the program’s vector editing functions; e.g. you could open a raster GeoTiff, then draw a polygon defining the area you want gridded on top of the raster image. You also need to highlight the polygon area you want to have gridded using the “Pick” tool (the red arrow icon at the top): 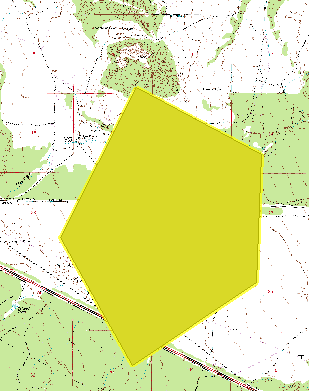 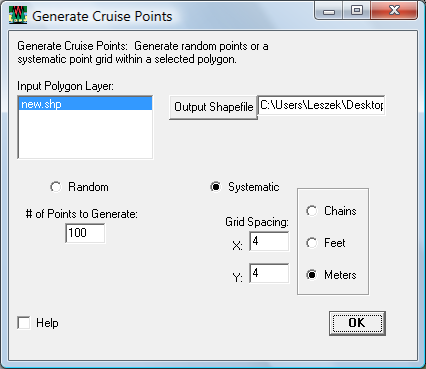 Here, new.shp is the polygon shapefile with the highlighted area to be gridded; specify the output grid point shapefile by clicking on the “Output Shapefile” button (entering the directory in the box at right has no effect). Then choose either a random grid and the number of random points, or a systematic grid with the desired spacing and units. Click OK, and the grid shapefile will be created and added to the map view; if the area is large, and the spacing is small, this may take a while. Here’s that grid shapefile plotted on top of the original raster (zoomed in very close): 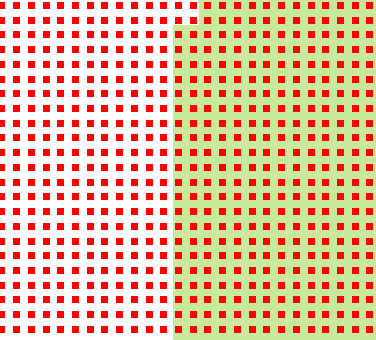 With software like DNRGarmin, you could upload such a grid to your GPS as a set of sampling points.