Assigning Attributes From A Polygon Shapefile To Another Shapefile

Published by
Leszek Pawlowicz
in GIS, MapWindow and shapefile. 2 Comments


Here’s a recap of yesterday’s request from TD:

Wondering if you know of an easy way to create centroids (points) from polygons – I am using MapWindow and various other free tools. What I am ultimately trying to do is assign attribute data (parcel #) to a polygon shapefile representing buildings.  In other words, for each building polygon I want to assign it the correct parcel #.

For this, I’ll use the most recent version (the 4.7 Release Candidate) of the freeware GIS program MapWindow, whose features have been the subjects of many previous posts on this blog. First step is to load in the parcel polygon shapefile (parceltest.shp; displayed here as green polygons), and the centroids point shapefile (centroid.shp; the red dots):

From the GIS Tools => Vector menu, select the “Identity Of Shapes With Polygon” function: 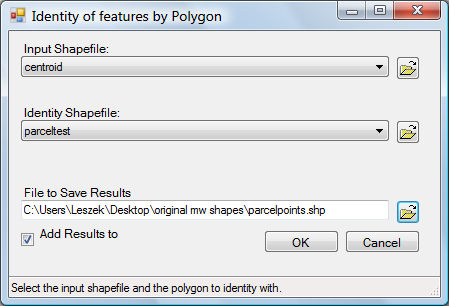 (Yeah, the function window title has a different name than the menu item, at least for now in the Release Candidate)

The “Input Shapefile” is the one I want to assign polygon attributes to (centroid.shp), while the “Identity Shapefile” is the source of those attributes (parcel info in this case, so parceltest.shp). The final output shapefile is specified under “File to Save Results. Note: you can’t just type in a filename in the box, you have to click on the folder icon at the right and enter the desired output name there. Checking the “Add Results to” box will add the output shapefile to the current display after processing is done. Click on OK to process the shapefiles; in this case, with the box checked, the output file will be added to the layers list:

To check to make sure the output point file has all the attributes from the polygon file, I’ll click the Attribute Table Editor button on the toolbar to open the output file’s attribute table. In this case, there were fields with the same name in both the input and identity shapefiles, and I got pop-up boxes to rename these fields to eliminate the name conflicts:

Once the attribute table came up, I could see that all of the parcel information (numbers, street addresses, county, state, etc.), which weren’t in the original building centroid shapefile, were now assigned to the corresponding centroids, including cases where more than one building was located on a single parcel: