Published by
Leszek Pawlowicz
in Google Maps and shapefile. Closed


Over a year ago, I posted on Google Map Creator, a program from the Centre for Advanced Spatial Analysis that lets you convert shapefiles into thematic colored maps for display in Google Maps. They’ve just created a new site called MapTube , “a place to put maps”, that collects links to maps created with Google Map Creator. You can search for maps covering a particular topic or area, and select multiple thematic maps for simultaneous display, to see if any relationships are visible between different datasets. Sliders set the transparency of the various maps displayed, and you can turn the legends on and off by clicking on the legend icon in the map thumbnail: 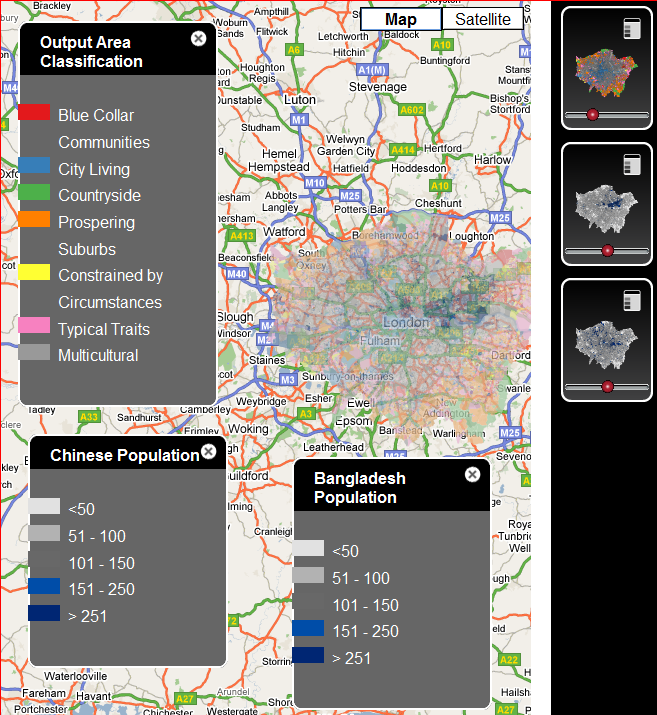 You can also create an account that lets you add your own maps to MapTube, but you have to host the actual map data yourself on your own server; MapTube’s function will be to index the metadata, preview the maps, and allow people to view them in a Google Maps interface. The current maps are heavily Anglo-centric (not surprising), and limited in number; the site’s ultimate usefulness will depend on how many people actually wind up creating maps for it. It would help if they could add an interface to MapTube directly to the Google Map Creator program, and also if there were some way in the program to directly upload Google Map Creator maps to a centralized data server and pass that link directly to MapTube.