Archive for the 'Magellan' Category Page 2 of 2

Yesterday, I posted about TritonRMP Maker, a simple program that lets you take any raster map image and convert it into a format compatible with the Magellan Triton series of GPS receivers. Two drawbacks of the program are the requirement that the map be in geographic projection, WGS84, for best results, and its inability to use the embedded georeferencing data in GeoTiffs to automatically calibrate an image. I’ve cobbled together bits and pieces from several other programs I’ve written to create TritonRMP_Helper. This program will:

END_OF_DOCUMENT_TOKEN_TO_BE_REPLACED

Published by
Leszek Pawlowicz
in GPS and Magellan. 4 Comments

The Magellan Triton 2000 GPS receiver I’ve reviewed in previous posts (one, two), and other similar units in the Triton series (the 400, 500 and 1500), are notable for their ability to display raster imagery like topographic maps and aerial photos. When first released, this was only available through the National Geographic Topo! software, which was expensive, buggy, and not very easy to use. While the National Geographic Topo! software has supposedly been improved, you’re still limited to their maps for upload to the Triton units, and they’re still expensive. And until recenlty, there was no ability to add maps of your own imagery to these GPS units. If National Geographic Topo maps were the only option for putting raster maps on the Triton GPS units, there wouldn’t be a compelling reason to buy them.

Fortunately, Mikhail Sharonov managed to reverse-engineer the format for these raster maps, and has released a free utility called TritonRMP maker that lets you create your own custom raster map files for use in Triton series GPS units. It’s a stand-alone program with no install required, just unzip it to the folder of your choice and run it: 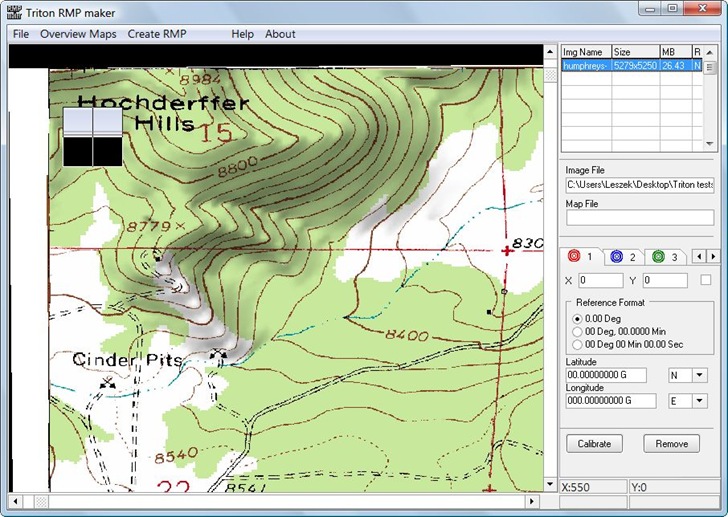 If you own the popular GPS program OziExplorer, and have used it to calibrate map images, you can import those maps and calibration data directly into TritonRMP. If not, you can open map images in one of 18 different formats, either downloaded directly or created in the GIS program of your choice, then use the built-in calibration facility to georeference the image by:

TritonRMP Maker automatically sets the zoom levels at which the map becomes visible/invisible based on the geographic size of the pixel. You can add additional images to the mapset that will show up at different zoom levels; for example, you could add and separately calibrate 1:250K, 1:100K and 1:24K topographic maps, and have the appropriate scale map show up at an appropriate zoom level on your GPS unit. When all maps are added and calibrated, use the Create RMP function to generate a raster map file for the Triton in the RMP file format; the name you save it under is the name it will have in the Triton. When the map generation process is complete, you could add the map to Magellan’s Vantage Point software and use that to upload it to your Triton GPS using the USB 1.1. interface (12 Mbps). But it will be easier and faster to stick your Triton’s SD card into a high-speed USB 2.0 reader (480 Mbps), and copy the RMP map file directly into the Map_Data directory on the SD card; when you replace the SD card back in the Triton, this new map will show up in the map selection screen where you can select it for viewing.

TritonRMP Maker is neat, fast and simple to use, but does have several drawbacks:

For GeoTiffs, I’ve written a small utility program that will help with both of these issues; that’s tomorrow’s post.

A Review Of The Magellan Triton 2000 GPS Receiver – Part II: Out In The Field

Published by
Leszek Pawlowicz
in Garmin, GPS and Magellan. 7 Comments

Yesterday’s post reviewed some of the hardware and software characteristics of the Magellan Triton 2000 GPS receiver, comparing it to my old Garmin 60Cx.  But the real test of any GPS receiver comes out in the field – how good a job does it do at determining your position, and recording data? I took both units out on field work in the southern Arizona desert in August (yes, I’m crazy), and also for a hike in my neighborhood, to compare the two.

END_OF_DOCUMENT_TOKEN_TO_BE_REPLACED

A Review Of The Magellan Triton 2000 GPS Receiver – Part I: Hardware And Software

Published by
Leszek Pawlowicz
in Garmin, GPS and Magellan. Closed

Not too long ago, Magellan announced that they had upgraded the firmware and PC software for their Triton line of handheld GPS receivers, noted for their ability to display raster imagery, and offered to send out review units to interested people. There are several free utilities for the Triton series that I’d been interested in posting on, plus I’d always been interested in the raster map capabilities of these units. I requested a review unit, and they were good enough to send a Triton 2000 to me a few weeks ago. I’ve had the opportunity to evaluate it in both recreational and field work environments, comparing it with my current GPS receiver of choice (Garmin 60Cx), and thought I’d post a review of the GPS unit itself before posting about free utilities.