A Review Of The Magellan Triton 2000 GPS Receiver – Part II: Out In The Field

Published by
Leszek Pawlowicz
in Garmin, GPS and Magellan. 7 Comments


Yesterday’s post reviewed some of the hardware and software characteristics of the Magellan Triton 2000 GPS receiver, comparing it to my old Garmin 60Cx.  But the real test of any GPS receiver comes out in the field – how good a job does it do at determining your position, and recording data? I took both units out on field work in the southern Arizona desert in August (yes, I’m crazy), and also for a hike in my neighborhood, to compare the two.

GPS Warm Fix Time: When you first start up a GPS for the day, it can typically take a minute or two to get a solid position measurement (longer if it’s been off for a while, or if you’ve moved a long distance away from where you last used it). The Triton takes longer than the Garmin to do this, primarily because it has to boot Windows Mobile first before starting the process of acquiring satellite signals. But after that first position fix, it shouldn’t take too long to re-acquire your position after you’ve turned the unit off and back on. Here are some results from a highly unscientific comparison:

Garmin: 11 seconds to re-acquire a position from full power off

So if you use Suspend mode for the Triton (power off button, then press the Enter key), results from the two units are comparable.

Antenna sensitivity: Again, this is highly unscientific. My Garmin 60 Cx has always amazed me at its ability to receive GPS satellite signals in locations where I wouldn’t have thought that possible (the inside of an office building, under an overpass or bridge, in the middle of a car). This is almost certainly due to its high-sensitivity helical antenna. The Triton, with a patch antenna, doesn’t do nearly as well in those difficult interior conditions; for example, on the dashboard of a car, the Triton didn’t pick up nearly as many satellites as the Garmin (though enough for a decent position fix). The Triton has a jack for an external antenna, which would probably help with its accuracy in these conditions. In the outdoors, though, for the most part the two units picked up exactly the same number of satellites, even in dense tree cover. The notable exception was satellites near the horizon; the Triton seems to share the same 10-degree exclusion zone as its cousin, the professional-grade MobileMapper 6, while the Garmin doesn’t seem to have any exclusion zone. In principle, excluding these low-angle satellites can improve accuracy.

Recording waypoints and tracks: For starting and stopping data recording, I’ll give the edge to the Garmin. Recording your current waypoint position takes a single button push with the Garmin, versus at least two for the Triton. And the Garmin has a separate track management page that makes it easy to start/stop/save tracks, while the Triton again takes more button/screen taps. Modifying waypoint/track names and colors is a lot easier with the touchscreen Triton, where you can tap on a letter, icon or track color  to select it; with the Garmin, you have to manually scroll through and select letters/numbers/icons/track colors, which takes a lot longer. The Triton screen keyboard isn’t a QWERTY layout, which is a bit odd, and you also have to switch between separate keyboards for letters, numbers, symbols, and text shortcuts (e.g. a key that enters a cardinal direction like North or South, and unit abbreviation like mi. or km.). I’m hoping they’ll add a QWERTY option in a firmware update.

Accuracy: With a GPS, one way to assess unit accuracy is to take it to a known position like an NGS benchmark, and then compare the measured position with the known position. With the Triton, though, I was able to load in an aerial photo with 1-meter resolution, and then compare the GPS position plotted on the aerial photo with the landmarks on the ground. In an area with wide open skies, and no satellite blockage by terrain or vegetation, the Triton was outstanding – it put me within a meter of the actual location every time. I can remember walking to the dashed yellow line in the middle of a road, which was barely visible on the aerial, and having the Triton position me right on top of it – that blew me away.

Closer to home, I took the Triton and Garmin out for a hike in my neighborhood, recording tracks of where I walked, and then overlaid them on top of an aerial map. In the photos below, the green track is the Triton, and the red track is Garmin. There was some tree cover and terrain blockage which would have degraded positional accuracy: 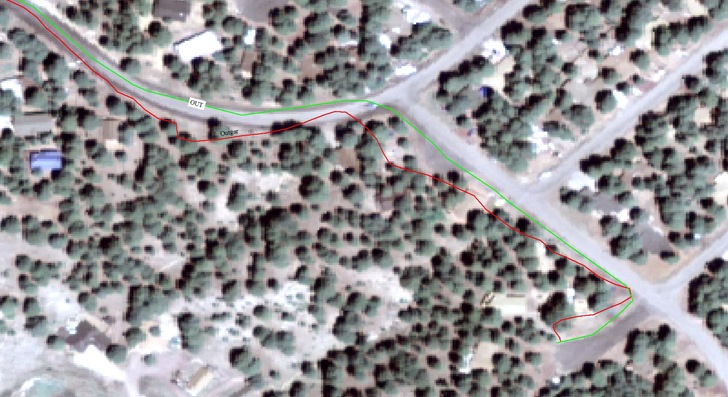 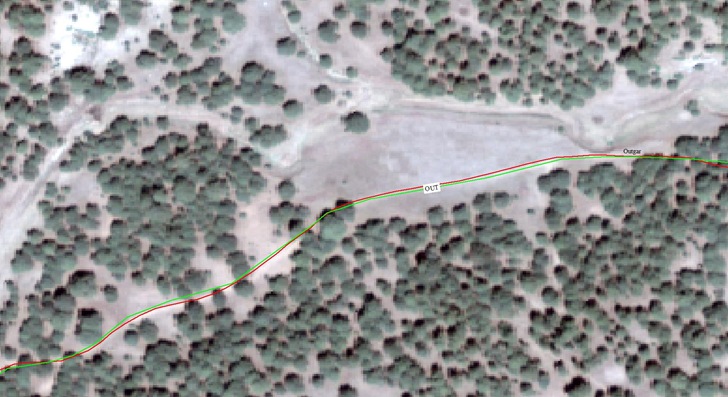 Overall, the position measurements of both units were outstanding; no complaints.

Waypoint averaging: One way to improve the measurement accuracy of a point position is to average multiple measurements, to cancel out random fluctuations in position due to noise. The Garmin does that, but the Triton does not, and I consider that a major drawback of the Triton. One way to get around that is to record a track at a single point, using a time interval to space out the points, and then average all the track points using a program like DNRGarmin. I tried to do that with both the Garmin and Triton at a single location, but when I plotted the two tracks in geographic coordinates, I saw this: 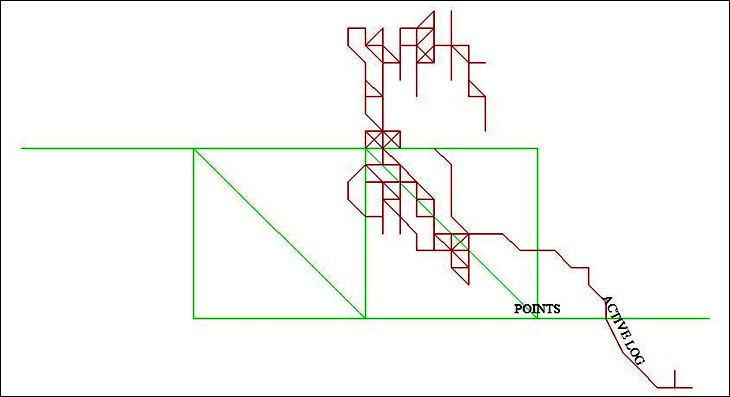 From this, one can see that the output positional accuracy of the Garmin is about 1E-06 degrees, or about 10 centimeters, while the Triton only outputs positions to the nearest 1E-05 degrees, roughly one meter. Looking at the GPX file data confirmed this; the Triton only had five decimal places of data for position, while the Garmin had eight decimal places (apparently the last two decimal places are spurious data). This might not matter to you, but to me it’s a big deal. I use waypoint averaging all the time to improve positional accuracy, and even if the Triton had that option, the dropping off of 1-2 decimal places of data would make any such averaging of dubious accuracy. I also regularly take perimeters of small areas with my Garmin; as long as I do this in short span of time, I can get a reasonably decent-looking area boundary. The one-meter resolution of the Triton makes it useless for this purpose. For that matter, the maximum zoom level of the Triton is 30 meters vs. 5 meters for the Garmin; I’d really like to see higher zoom levels added in future firmware updates.

Final conclusions: The Magellan Triton 2000 has come a long way from its rocky start, and is now a very usable GPS receiver. During the three weeks I’ve used it, it hasn’t crashed once, and only rarely exhibited minor quirks (like requiring two button bushes or screen clicks). While I can quibble about the software, interface, battery life and vector map support, the ability to import and use your own raster maps on this receiver is so fantastic that it more than outweighs those flaws; its additional features (camera and voice recorder) are a major plus as well. And the positional accuracy of the unit for navigation is more than I had hoped for.

But, and this is a big but, I need a GPS that can do waypoint averaging, and which stores and outputs data with better than 5-decimal-place accuracy. This may not be as big an issue for you, but for me, this makes the Triton by itself inadequate for my fieldwork. Hopefully, a future firmware update will resolve this issue, since it should be trivially easy to fix the software to add additional decimal places to the positional output. Until that happens, I’d either have to carry two GPS units with me, the Triton and the Garmin, or more likely leave the Triton at home.

At $345, the Triton 2000 is pretty expensive. If you can live without the digital camera, electronic compass and barometer (the latter two are pretty useless), the Triton 1500 is a much better deal at $280. For non-touch-screen models, the Triton 400 is probably the one to buy at $140; it has a somewhat slower processor than the 1500/2000 models (266 MHz vs. 400 MHz), but the display draw speeds for the 2000 are so fast that even cutting that speed by a third shouldn’t make a big difference in performance. The Triton 500 adds an electronic compass and barometer to the 400 model, but I don’t think they’re worth an extra $40. Whatever model you buy, the first thing you should go is visit the Magellan website and download the latest firmware updates.

7 Responses to “A Review Of The Magellan Triton 2000 GPS Receiver – Part II: Out In The Field”