Published by
Leszek Pawlowicz
in GIS, KML and shapefile. 1 Comment


ogr2ogr is a simple command line utility that converts between supported vector file formats. For those who don’t like dealing with command line programs, and need only limited conversion capability, Inventis has written a simple Windows front-end for ogr2ogr called ogr2gui: 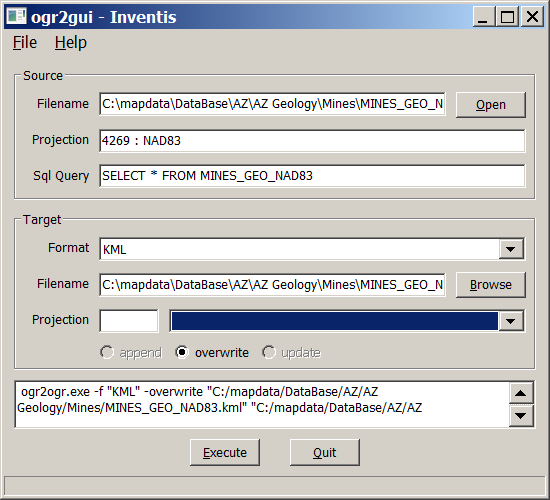 Documentation is limited, so it’s not clear which input formats are fully supported. For example, input shapefiles work, but I had problems getting E00 files to convert (see this post for an E00 to shapefile conversion process that does work). Hopefully documentation will improve with time along with functionality (this is already the fourth release).

Output formats are limited to:

Converting shapefiles to Google Earth’s KML format works as long as the shapefile is in latitude/longitude format, WGS84; attribute table data added to the placemark pop-up for point shapefiles, but not lines or areas. There are better converters for shapefiles to KML conversion like shp2kml, but this is a good choice for converting other less-well-supported vector formats into the supported output formats..