"I Can See My House From Here": Line-Of-Sight And Viewsheds In MicroDEM

Published by
Leszek Pawlowicz
in DEM, GIS and MicroDEM. 2 Comments


Although you view a DEM (digital elevation model) as a two-dimensional representation of terrain in MicroDEM, the program can treat it as a 3-dimensional surface and analyze it as such. Perhaps the simplest example of this is in answering the question, “What terrain can you see when you’re standing at a specific location?”, and MicroDEM has tools that let you do that. 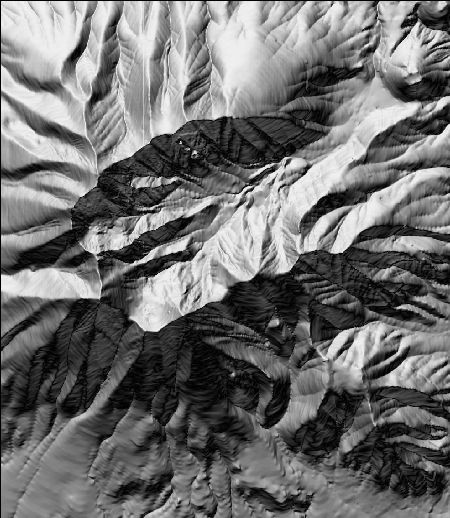 Suppose I’m standing at a point on the southern side of the interior bowl of the peaks, and want to know what terrain features are visible when I look due north. Selecting View => LOS from the menu, or clicking on the LOS button on the main toolbar, puts me in Line-Of-Sight mode. Double-clicking on the terrain sets the ground position I’m viewing from; double-clicking on a point north of my position sets the point I’m looking towards. The program then plots a line across the terrain, with green representing areas that I can see from my current position, and red representing areas that aren’t visible: 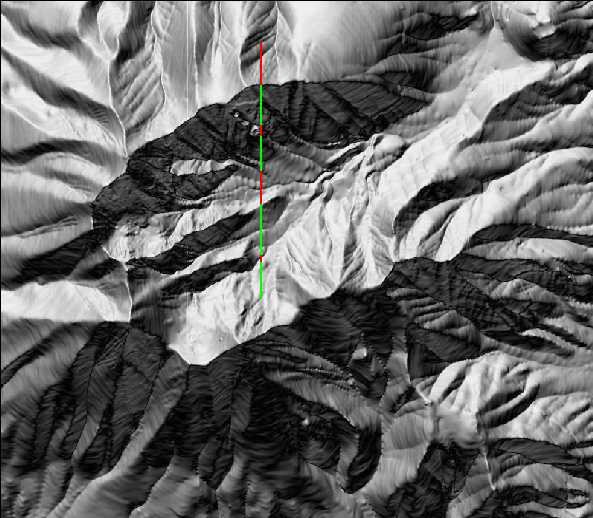 MicroDEM also produces a graph that shows the terrain profile between the two points you clicked on, with the visible sections marked in green and the hidden sections in red:

Click and drag on an edge of the graph to re-size it; right-clicking gives you additional options. For example, if you right-click and select “Measure slope”, you can select any two points on the line by double-clicking, and measure the slope between them. If you move your cursor across the graph, a crosshair will appear on the terrain indicating which position that corresponds to.

To remove the line on the terrain map, click on the “Force redraw” button on the map toolbar:

Now imagine repeating that line-of-sight process over and over again at every angle; the resulting image would show you what fraction of all the terrain was visible from your location. Such an image is called a “viewshed”; MicroDEM reveals its military heritage by sometimes referring to it as a “weapons fan”. To create a viewshed image, click on the “weapons fan” button on the map toolbar:

Then double-click on the location you’ll be viewing from on the map. The Viewshed Parameters window will open up:

The “Color & Algorithm” button options up another options window:

Here you set whether you want the terrain visible from the location to be marked on the map, the masked terrain, or both; the colors for visible and masked terrain; and whether you want a symbol at the observer location or not, with the option to select the symbol by clicking on the “Observer” button. “Opaque fans” doesn’t currently have much effect; “Draw range circles” will work if checked as long as you’ve set the range circle distances by clicking on the “0-Range circles” button. The two “Display” checkboxes create non-georeferenced stand-alone images of the fans and associated data, which I find of limited use.

With the default settings for both the Viewshed Parameters and the Fan Drawing Options, I get the following: 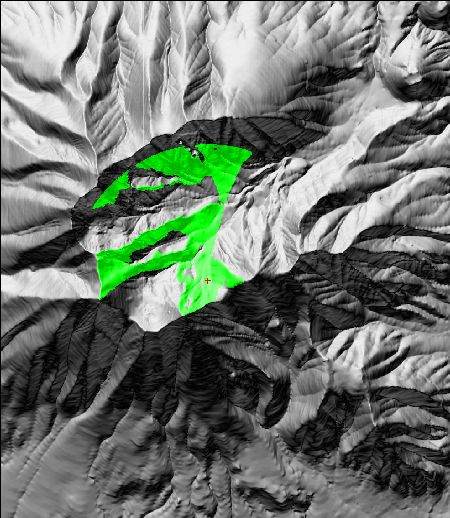 The green areas mark the terrain visible from the observer’s location, marked with a red cross. A text window tells me that 17.41% of the total area with a radius of 2500 meters around the observer is visible. To remove the viewshed, right-click on the map, select “Manage Overlays”, and remove the single overlay.

What if I want to put that viewshed on a map, instead of on the image of the terrain? If you load a georeferenced map that covers the same area as the DEM, say a topo map, MicroDEM associates the map with the terrain so that you can perform the same LOS and viewshed operation on the topo map to get a similar display. Using File => Open Scanned Map, I can open up a map that covers the same area as the DEM, and plot a viewshed directly on top of it, this time plotting both the visible (green) and masked (red) areas on it: 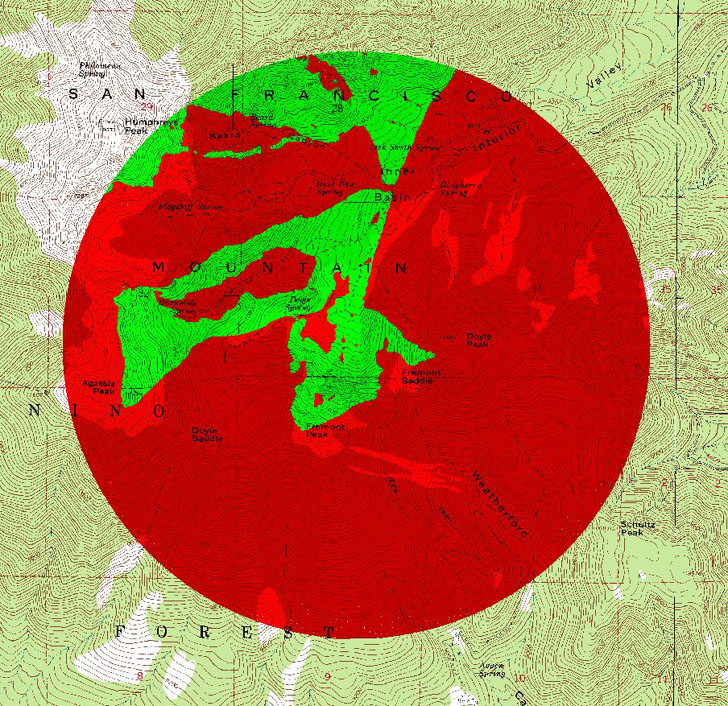 “Keyboard entry” brings up a window when you double-click on terrain that lets you enter the exact coordinates:

Now suppose I want to export the viewshed alone, without an underlying terrain or topo map, for use in another GIS program as either as a raster image or as a polygon shapefile. Exporting it as a usable raster image is easy, but creating a polygon shapefile out of it takes a bit more work. Both will be covered in upcoming posts.

2 Responses to “"I Can See My House From Here": Line-Of-Sight And Viewsheds In MicroDEM”